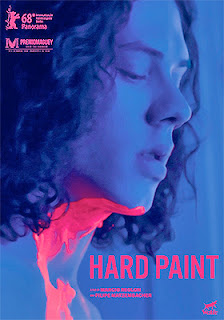 Wolfe announced this past week that the Brazilian writing and directing team of Filipe Matzembacher and Marcio Reolon’s international film sensation, Hard Paint, will be making its domestic DVD debut on July 30.

As with Retablo, Hard Paint has worked the film festival circuit to its advantage and Wolfe has been very attentive in finding this international jewels for the domestic home entertainment marketplace.

Matzembacher and Reolon, who worked on the film through a continuing rehearsal process (much like a stage play) for seven solid months, took their film out internationally before opening it theatrically in Brazil.   In retrospect it was a smart decision as the filmmakers elected to first showcase their film at the Berlin International Film Festival in February of 2018.   It won Best Feature Film!

More festivals followed — marked by both awards and critical raves — and then came the “big one,” the Rio de Janeiro International Film Festival in November of 2018.   How would Hard Paint stack up against other home-grown film productions?

Competing in the highly competitive “Première Brazil” category for the prestigious Redentor (think: Oscar), it not only won Best Film and Best Screenplay, but two acting Redentors as well — Best Actor for Shico Menegat’s performance as Pedro (his feature film debut) and Best Support Actor for Bruno Fernandes.

It was a night of nights for filmmakers Filipe Matzembacher and Marcio Reolon … and now that excitement — and all of the hard work that went into the making of the film — can be enjoyed on July 30 when Wolfe’s DVD release of Hard Paint.

The story is divided into three sections — “Luiza,” “Leo” and “Neon Boy.”   In the first we meet Pedro, a shy, slight, near reclusive young man, who is in trouble with the law and now must appear in court.   His sister, Luiza accompanies him, but he can’t count on her for future court dates as she is off to college.   She’s basically his only connection to the real world (mother dead, father long since gone) … she instructs him to go outside at least once a day and walk (for fear he will just cocoon at home), even if it is just for five minutes. 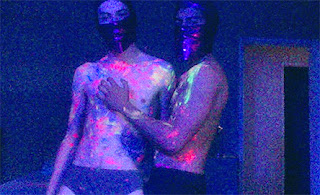 Alone in a world, but with unlimited communication opportunities, Pedro nevertheless feels abandoned.   It is at this point that he hits upon the idea of performing via webcam … a dark room, painting himself with “neon” paint and dancing for an unseen audience.   He’s a hit … a web wonder.

This brings us to chapter two, “Leo,” where another performer mimics Pedro’s success.   He reaches out to this competitor and asks him to stop, which opens the door to a world outside of his bedroom … others who share his feelings.   Leo (Bruno Fernandes) is actually an accomplished dancer, who works the dark world of the sex trade in order to make enough money to enter college and put this world behind.

In any case, one thing leads to another and the two team up for a duo act, which becomes an even bigger web sensation.

The closing act, “Neon Boy,” brings us full circle back to Pedro … what is his future?   Isolation, fame, an outside world … and the sins of his past all come together in a poignant finale.

Hard Paint is presented in Portuguese with English subtitles. 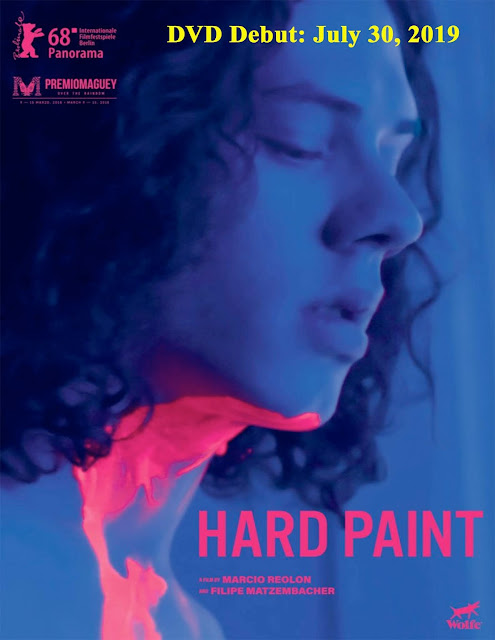