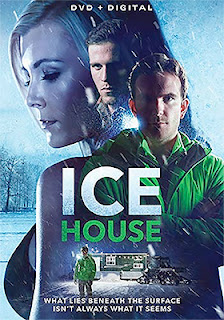 Oh lord that’s cold.  It looks cold … feels cold.   And when you dig into the production of director Steven Elbert’s Ice House — making its DVD debut on Nov. 24 courtesy of Mill Creek Entertainment — you learn that it is all real!  It’s damn cold; bone-chilling cold … blizzard cold!!

Grant Reed (Roger Wayne — Heart of Wilderness, Emma’s Revenge, Fences) has lived a privileged life, living off of the family’s fortune.  He’s even got a trophy bride, Courtney (Tabby Delarosby) … more on that in a moment.

His high school buddy, Wayne (Greg Berman — Ultimate Redemption), came from the “other side of the tracks” and when his high school days were finished he joined the Marines and was deployed.

Grant was popular, Wayne a loner, but the two were friends.   We pick up this relationship now, in the depths of winter in Minnesota … Wayne has been back home from Afghanistan for a while, but now Grant has reached out to him.   An invitation to go ice-fishing.

About this point in the movie you are thinking, what kind of invitation is that?   Sitting in a little box, with a hole poked in the ice, freezing your ass off in the dead of winter.   Well, Grant, as mentioned is rich — not of his own doing — and this “ice house” comes with all the amenities … a bar, central heating, cable TV, a kitchen; sort of a home-away-from-home!!

The balance of the film takes place in this ice-fishing “cabin” on the lake (actually filmed on Lake Mille Lacs).   It is here that we learn of Grant’s real motives.   He’s had a whole bunch of cameras installed in his home, Courtney is aware of them, and she thinks that she’s learned how to turn them off, so that her husband can’t spy on her.   That’s an illusion, he sees all!! 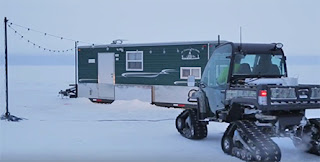 Ice House is a twisted psychological thriller, very much in a Hitchcockian sense, that builds and builds with tension as Grant’s rage is heaped on Wayne.   Director Steven Elbert took some bold chances shooting the violent ending of the film in a full-blown blizzard … every bit of the footage is real.

We will tell you this much, and no more.   Of Grant, Courtney and Wayne, not all will survive this fishing trip!!   Ice House on DVD from Mill Creek Entertainment on Nov. 24, complete with Digital Copy … be sure to check it out! 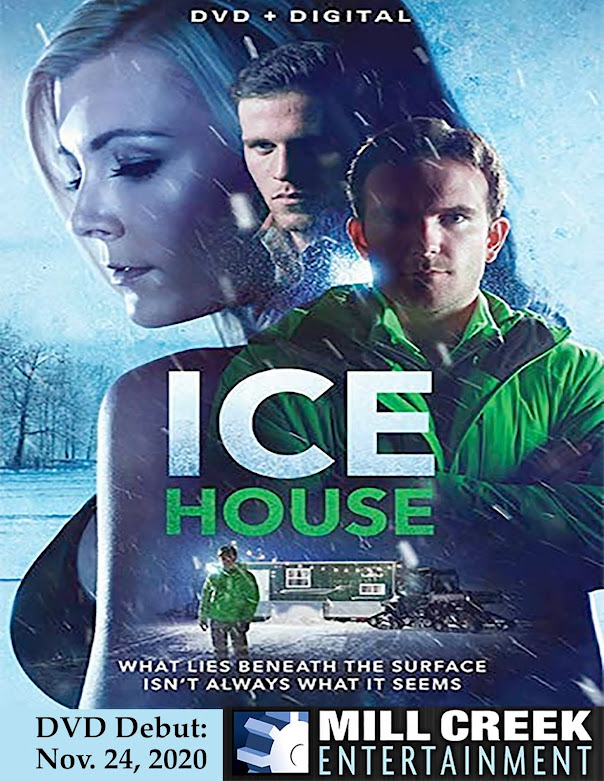