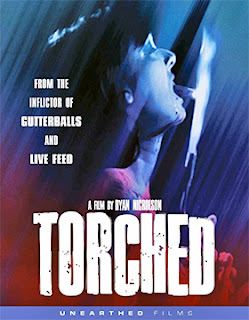 Unearthed Films, with sales and distribution support provided by MVD Entertainment Group, has a collector’s edition of the late Ryan Nicholson’s 2004 debut as a director, Torched, ready for both DVD and Blu-ray release on Dec. 15.

Call it an experimental film, Torched, introduced this f/x and makeup whiz as a filmmaker; a director, in his own right.   He had logged nearly two decades in the technical arena before making the transition to the director’s chair.

With Torched, Nicholson got a chance to show off his understanding of makeup and prosthetics with a straight-forward tale of revenge.   Of note, both Elisabeth Jolliffe and Sarah Bergeest, newbies to the business, have gone on to have careers of their own and worked under Nicholson’s direction here.

Deanna (Michelle Boback) is no sooner introduced to us, when she is attacked and raped.  Since her character is that of a nurse, she has the presence of mind to collective evidence.  Before she can act on getting the samples to the lab, etc., she is attacked in her apartment, but turns the tables on her attacker and makes him a prisoner.

Here is where Torched gets particularly gruesome.   She takes a blood sample, has the sperm sample from the first encounter and delivers them both to a trusted colleague … do they match?   While she waits for the results, she comes up with daily creative ways to torture the guy she has a prisoner — and they are nasty, cringe-worthy acts that signal that there is probably no going back … Deanna has gone down a rabbit hole of revenge!

Bonus goodies include a vintage commentary from director Ryan Nicholson, two different format presentations of the film, an extended version of Torched, out takes, behind the scenes footage and a making-of featurette titled “Behind the Burn: The Making of Torched.” 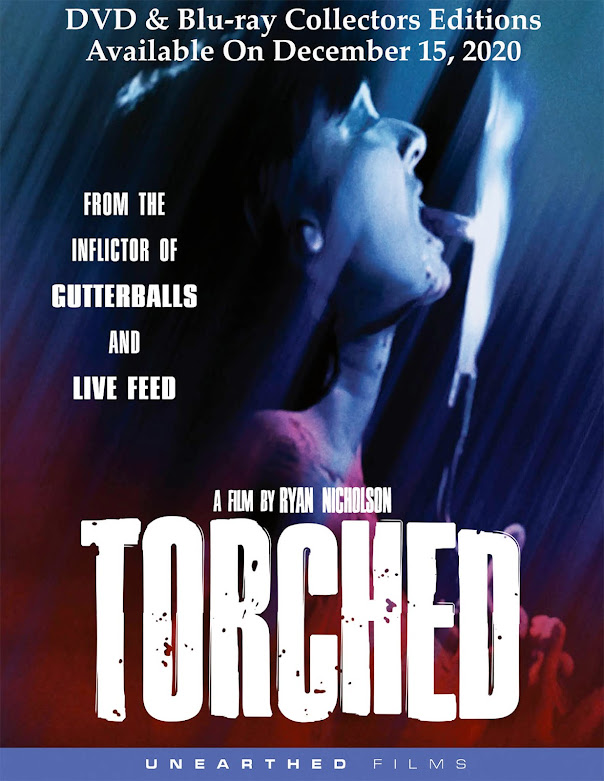