ClassicFlix Dials Into Dec. 15 For The Release Of Both DVD And Blu-ray Editions of Director Archie Mayo's Marx Bros. Classic A Night In Casablanca 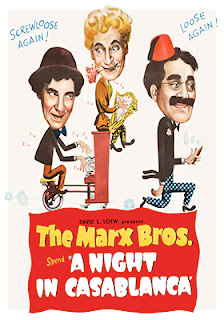 ClassicFlix, with sales and distribution support provided by MVD Entertainment Group, has tabbed Dec. 15 for the Blu-ray debut of director Archie Mayo’s 1946 comedy gem, A Night in Casablanca, starring the Marx Brothers.   A DVD edition will also be available on the same date.

1941, June, theatres nationwide had the latest film from Groucho, Chico and Harpo — better known collectively as the Marx Brothers.   It was The Big Store, but sadly, it would be the last film from the brothers for five years as Dec. 7 brought World War II to America.   It was also their last film at MGM (Go West, At the Circus, A Day at the Races, A Night at the Opera … it was an impressive run).

In a running-gag publicity stunt, Groucho went full-tilt at Warner Bros. when they sent a routine inquiry as to the nature of the proposed film title “A Night in Casablanca.”   They owned the rights to the Joan Alison and Murray Bennet stage play, “Everybody Comes to Rick’s,” which was, of course, produced and released theatrically as Casablanca, winning Best Picture, Best Screenplay and Best Director for Michael Curtiz in 1942. 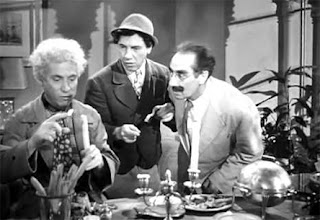 It was simply too tempting for Groucho to pass up.   The letters were published as part of the film’s advertising campaign and are every bit as funny as the film itself.   Somebody in the legal department was just asking about the nature of film … the rest, they say, is history!!

World War II is over, but Casablanca is still a city of intrigue.   Indeed, three consecutive managers of the Hotel Casablanca have been mysteriously murdered.   Through a series of bizarre events (think: Harpo), Ronald Kornblow (Groucho) ends up as the new manager.
That’s a problem for Count Max Pefferman (Sig Ruman), who is actually a Nazi in hiding by the name of Heinrich Stubel, as there is a treasure in stolen French art hidden somewhere in the hotel, and this new manager must be dealt with.

Through a series of bizarre events (again, think: Harpo), the treasure is discovered, Kornblow and his buddies, Rusty (Harpo) and Corbaccio (Chico Marx) are arrested and it looks like Stubel is going to be able to make off with the loot. 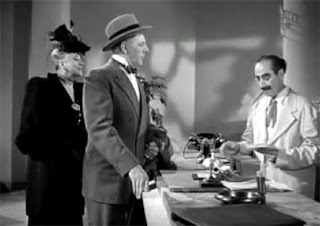 Quick, a show of hands, who believes that Stubel is going to outwit the Marx Brothers?

Bonus features include a live-audience audio recording where the Marx Brothers tested material for the movie, plus there is a treasure trove of vintage radio commercials promoting the film and an extensive image gallery featuring stills, posters, lobby cards and other materials used to promote the film (not sure if Groucho’s letters are included … those are worth a look-see). 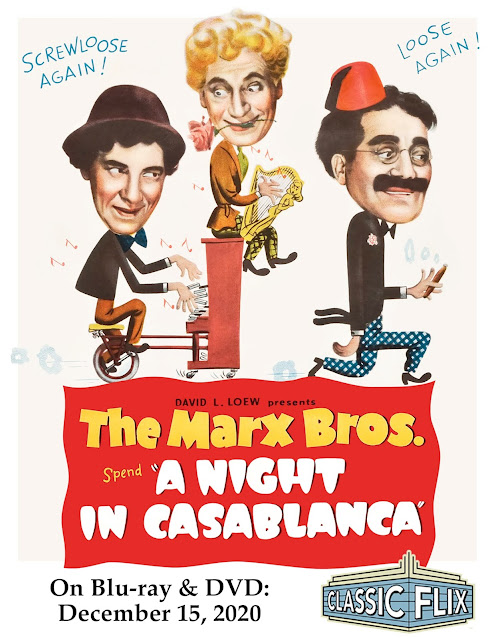 Email ThisBlogThis!Share to TwitterShare to FacebookShare to Pinterest
Labels: ClassicFlix Dials Into Dec. 15 For The Release Of Both DVD And Blu-ray Editions of Director Archie Mayo's Marx Bros. Classic A Night In Casablanca