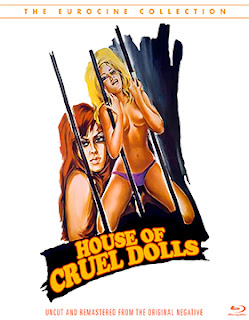 While most of the major “Hollywood” studios struggle on without their chief revenue generating new theatrical hits, the indies labels seem to have stepped up their game with the unearthing of rare cinematic treats.   Not a week goes by that something new is announced.   This latest addition to Full Moon’s “Eurocine Collection” is a case in point.

House of Cruel Dolls, or La Maison des Filles Perdues, which literally translates out to “The House of Lost Girls,” was released in France in the summer of 1974 as a mixed spy thriller and out-and-out sexploitation tale (long suspected of mixing bits and pieces from other films to create a narrative for the more salacious elements).

You have to understand the period in which House of Cruel Dolls was filmed and released.   In 1972, Deep Throat brought the world of adult cinema into the mainstream, but still filmmakers who sought to exploit this, were also concerned of running afoul of the law in this country or that. 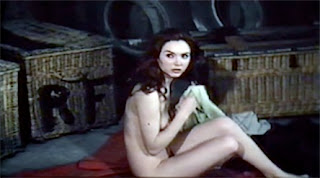 The thought was that you could push the envelope in terms of graphic sexual content by blending in a dramatic narrative that justified the “real” audience-drawing elements.  In other words, audiences didn’t come to see what secret agent Marc Roberts (Jack Taylor — Dr. Jekyll vs. The Werewolf, Female Vampire, The Mummy's Revenge), in footage lifted from director Gian Paolo Callegari’s 1967 film Agente Sigma 3 - Missione Goldwather, was up to.  Rather, they came to see (that should read: SEE) lovely young women — without their clothes on — trying their best to survive in desperate situations.

These women in distress — kidnapped and used by sex ring operators — include the likes of Sandra Julien (The Shiver of the Vampires, Nada) and Magda Mundari (The Adulteress, The Infamous House of Madame X).   They are in peril, they are naked, and from time-to-time filmmaker Pierre Chevalier cuts away to the random actions of agent Roberts to justify the existence of the film … which is, of course, an important story about women being exploited as sex slaves and the actions by authorities to stop it (wink wink, nod nod).

Full Moon Features has unearthed the uncut English-dubbed negative and will be bringing House of Cruel Dolls to the domestic market for the first time on Apr. 13 as both DVD and Blu-ray product offerings. 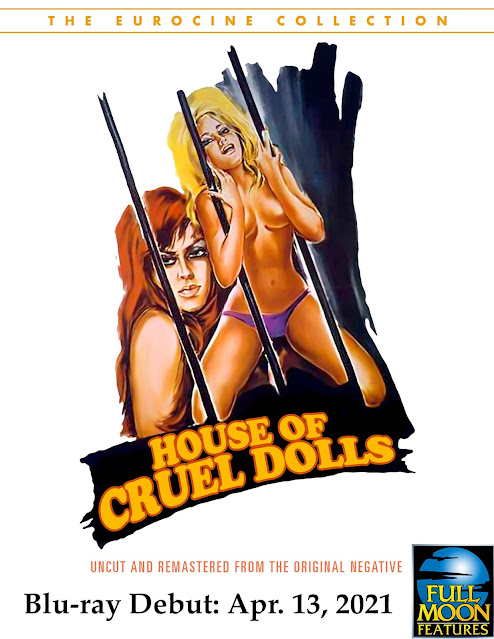