The Film Detective Sets DVD And Blu-ray Special Editions Of Hercules And The Captive Women For Release On Apr. 13 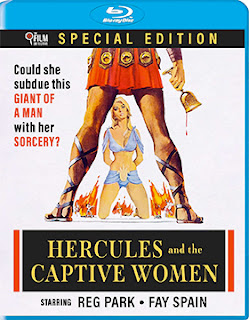 Let’s see a show of hands from fans of “sword-and-sandal” epics spawned by Hollywood and quickly mimicked by chiefly Italian filmmakers with their own, some might say “peculiar,” style of filmmaking!   All of them, Spaghetti Western, giallo and “sword-and-sandal,” seem to be Italian in nature and all have their legions of fans.

This week, we turn our attention to writer/director Vittorio Cottafavi’s 1961 “sword-and-sandal” epic, Ercole alla Conquista di Atlantide (literally: “Hercules at the Conquest of Atlantis”), which arrived in the domestic marketplace in the spring of 1963 as Hercules and the Captive Women.

The Film Detective announced this past week that this “sword-and-sandal” classic will be getting a new 4K film restoration from 35mm archival elements (with the film’s proper aspect ratio) and will be released as a goodies-loaded “special edition” on Apr. 13.   Both DVD and Blu-ray selections will be available for fans to choose from. 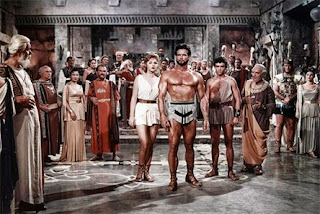 When strange things begin to happen in ancient Greece, the power-that-be turn to Hercules (played here, in his film debut, by former three-time Mr. Universe, Reg Park — Hercules in the Haunted World, Maciste in King Solomon's Mines, Hercules, Prisoner of Evil, Hercules the Avenger) to set things right.  The problem this time around is that Hercules is married (Luciana Angiolillo) and has a son and would rather stay home and enjoy the good life. 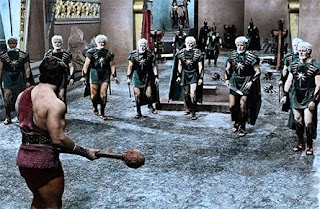 So, the crafty King of Thebes, Androcles (Ettore Manni — Amazons of Rome, Attack of the Normans, War of the Zombies), simply drugs Hercules and kidnaps him.   In a series of adventures that follow, Hercules comes around and accepts the challenges that include rescuing a doomed princess (Laura Efrikian in her film debut), battling the legions of her duplicitous mother, Queen Antinea of Atlantis (Fay Spain — Dragstrip Girl, The Crooked Circle, God's Little Acre) and bringing about the destruction of Atlantis to return things to “normal.”

As to bonus goodies, The Film Detective is including the debut of the documentary titled Hercules and The Conquest of Cinema, commentary from film critic, Tim Lucas (Video Watchdog … “Mario Bava: All the Colors of the Dark”) and the complete 1992 episode of Mystery Science Theater 3000 (MST3K): Hercules and the Captive Women. 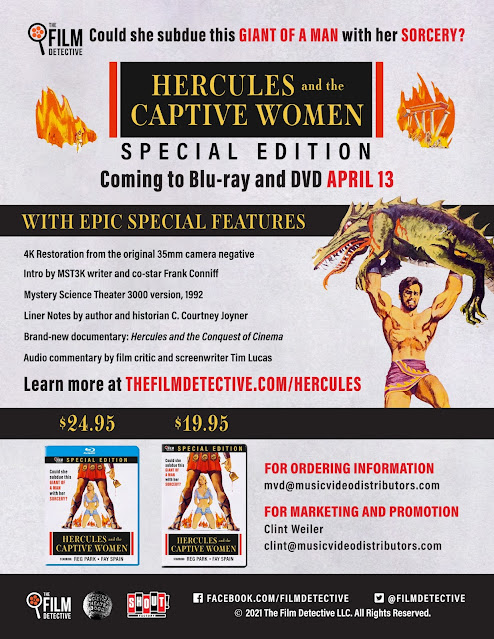 Email ThisBlogThis!Share to TwitterShare to FacebookShare to Pinterest
Labels: The Film Detective Sets DVD And Blu-ray Special Editions Of Hercules And The Captive Women For Release On Apr. 13