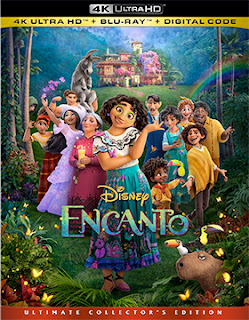 Walt Disney Studios Home Entertainment has tabbed Feb. 8 as the street date for a three-SKU helping of the filmmaking team of Bryon Howard and Jared Bush’s enchanting animated delight, Encanto.

The ARR works out to 74 days and domestic box office receipts are an impressive $81.5 million.

The SKU configuration for Encanto will be Combo Pack editions for both the 4K Ultra HD (with Blu-ray) and Blu-ray (with DVD) formats, plus a stand-alone DVD edition.

Starring the voice of Stephanie Beatriz (In the Heights and as Rosa Diaz in the Brooklyn Nine-Nine TV series) and with the songs written by Oscar-winner and two-time Emmy-winner Lin-Manuel Miranda (In the Heights, Hamilton and “How Far I’ll Go” from Ralph Breaks the Internet), Encanto arrives in the home entertainment packaged media marketplace loaded with extras.

For starters, there is a “Sing-Along with the Music” option, outtakes, deleted scenes, the animated short film titled Far from the Tree and five production featurettes — “Familia Lo Es Todo,” “Discover Colombia,” “A Journey Through Music,” “Let's Talk About Bruno” and “Our Casita – La Casa Madrigal.”