Writer/Director Khalili Dastan's The Way On DVD From Gravitas Ventures On Jan. 04 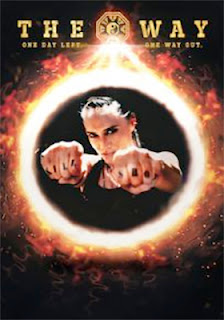 Back in the day, some 13-years earlier, Jane was a no-nonsense, merciless street fighter on the underground fight club circuit.   She was tough-as-nails, mean to her core, a killer, even to the point of having “K I L L” and “S H O T” tattooed on her knuckles.

That attitude — and skill-set, or should we say, “kill-set” — has landed her on death row for First Degree Murder!   Her appeals have been exhausted and in 24 hours she will be executed.   But, as Jane as counted out the years on Death Row, she has come under the influence, begrudgingly at first, of a Qi Gong master by the name of Xin (played by Joan Wong), who has taught her about discipline and finding inner-peace.

However, there is a kicker, prison guard Max Stone (Kelcey Watson) has fallen in love with the new Jane, and wants to “rescue” her from her date with destiny.   She is at peace, ready to let go … he is not.

Email ThisBlogThis!Share to TwitterShare to FacebookShare to Pinterest
Labels: Writer/Director Khalili Dastan's The Way On DVD From Gravitas Ventures On Jan. 04