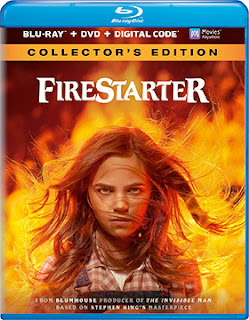 Universal Pictures Home Entertainment announced this past week that director Keith Thomas’ reboot of the Stephen King supernatural tale, Firestarter —originally adapted for the screen in 1984 by filmmaker Mark L. Lester, with Drew Barrymore starring as the kinetic Charlie McGee — will be making the transition from theatrical venues to the home entertainment packed media marketplace on June 28.

In what appears to be the studio’s new distribution strategy, films open theatrically and then are available for streaming and packaged media on a day/date basis 46 days after the theatrical opening.   This was the same window for The Northman.

Planned for release are DVD and Blu-ray/DVD Combo Pack editions.

Bonus features, which will be available for both formats, include commentary from director Keith Thomas (The Vigil), an alternate ending, deleted and extended scenes, a gag reel and a quartet of featurettes — “A Kinetic Energy,” “Spark a Fire,” “Igniting Firestarter” and “Power Struggle.”