Vinegar Syndrome Has A New 4K Ultra HD Edition Of Thriller: A Cruel PIcture Set For Release On July 26 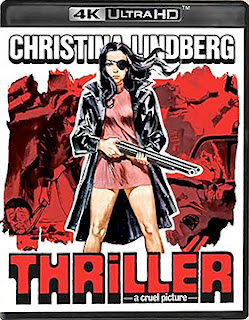 This new 4K film restoration is sourced from the original uncensored 16mm camera negative — the film was picked by American International Pictures in 1974 for domestic theatrical distribution, blown-up to 35mm, dubbed in English, heavily censored (something on the order of 22-minutes worth of footage was trimmed) and then released as They Call Her One Eye.

Poor Madeleine (Christina Lindberg — Swedish Wildcats, Maid in Sweden, The Swinging Co-eds), she was sexually assaulted as a young girl, which rendered her mute.   On a promising day (a visit to a specialist who might be able to help her regain her speech), she accepts a ride from a stranger (Heinz Hopf), is kidnapped, hooked on heroine, enslaved into a life of prostitution and just when you thought it could not possibly get any worse for her, her vicious pimp blinds her in one eye … cross him again and you will lose the other one!!

That’s her limit, she starts to train, prepare and then have her revenge.   Her weapon of choice, a shotgun (messy, of course)!! 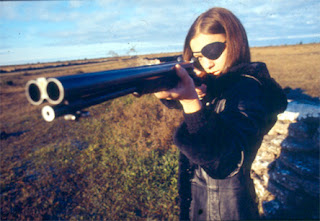 Vinegar Syndrome has the real deal here, which can be viewed with the original Swedish language track or with the English dubbed audio track for both the uncut and domestic theatrical censored version.

They will be two buying options.  A double-disc Blu-ray selection, or a 4K Ultra HD/2 Blu-ray Combo Pack.

Email ThisBlogThis!Share to TwitterShare to FacebookShare to Pinterest
Labels: Vinegar Syndrome Has A New 4K Ultra HD Edition Of Thriller: A Cruel PIcture Set For Release On July 26