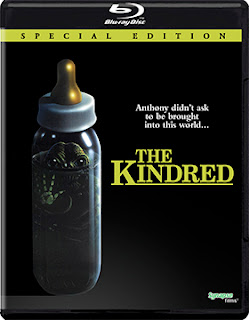 Synapse Films, with sales and distribution support provided by MVD Entertainment Group, has looked far over the release horizon and tabbed Oct. 25 — allowing plenty of time to bang the promotional drums for this one — as the Special Edition Blu-ray street date for the 1987 creature feature, The Kindred.

Three UCLA students — Jeffrey Obrow, Stephen Carpenter and Stacy Giachino — produced a short film and begin shopping it around (like a calling card).   Newly formed FM Entertainment (Joel Freeman, who would serve as executive producer) agreed to finance it and the trio would work their own short film into a feature-length version (Carpenter and Obrow co-directing, with Giachino onboard as producer).

An eclectic cast was assembled, with two Oscar winners, Rod Steiger (Best Actor for In the Heat of the Night) and Kim Hunter (Best Supporting Actress for A Streetcar Named Desire), as the marquee names, and David Allen Brooks (Manhunter, Cast Away), Amanda Pays (Leviathan) and Talia Balsam (Crawlspace, No Strings Attached) recruited to do most of the heavy lifting in the acting department.

The real star of The Kindred, however, is the creature, or should we say, “Anthony,” the “other son” of Dr. Amanda Hollins (Kim Hunter). 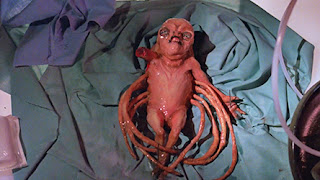 Mad science experiment (with all of the best of intentions) gone awry, the good son is assigned the task of destroying the research (not knowing exactly what it is), a mysterious beauty arrives “to help” (that is code for “hidden agenda), a family friend who wants the research for himself (murder is certainly an option), the sexy girlfriend and various members of the “victim pool” … a classic mix of horror and/or sci-fi elements … the result, a genre-fan favorite.

Bonus delights included with the Blu-ray debut of The Kindred from Synapse Films on Oct. 25 include commentary with filmmakers Jeffrey Obrow and Stephen Carpenter, with moderation by horror expert Steve Barton, the newly prepared feature-length documentary titled Inhuman Experiments, on-set footage of the creature effects, storyboards and an extensive stills gallery. 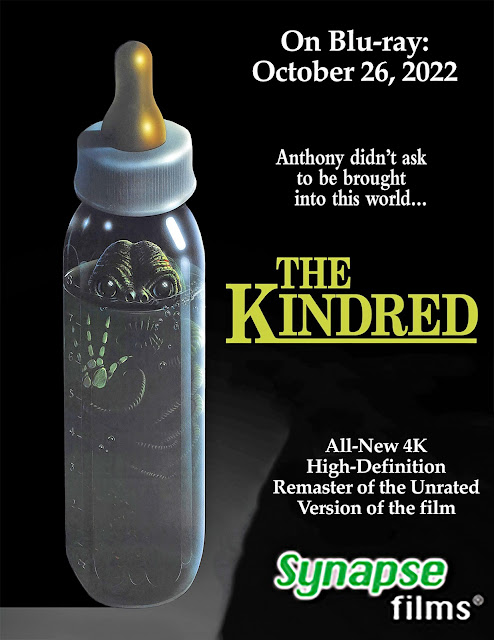