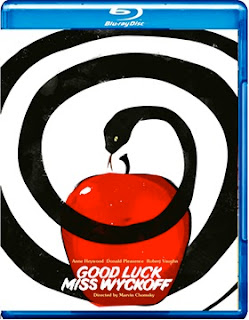 Director Marvin Chomsky’s 1978 film adaptation of Pulitzer Prize-winning playwright (1953, for the Broadway production of Picnic) William Inge’s novel, Good Luck, Miss Wyckoff, has been restored by Vinegar Syndrome to its uncut version (from the original 35mm negative) and will be heading to market on Aug. 13 as a Blu-ray/DVD Combo Pack.

1954, Kansas, a spinster high school teacher by the name of Evelyn Wyckoff (played by Anne Heywood — The Fox, Midas Run, I Want What I Want, etc.) is undergoing therapy (psychiatrist is played by none other than Donald Pleasance) for her isolation and sexual repression.   A common theme in Inge’s works — Bus Stop, Picnic and Splendor in the Grass — but here it is taken to another level … and even by 1979 standards Good Luck, Miss Wyckoff was a tough film to market.

For example, the original theatrical trailer only teases the “event” that proved to be “most shocking” and spends the bulk of its running time making the film seem like a cousin to The Prime of Miss Jean Brodie.   It is depicted as something of a Harlequin Romance about a sexual repressed teacher yearning for love, only to fine betrayal … it is a whole lot more than that! 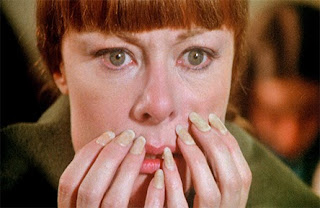 Bonus features include the re-cut theatrical re-release, The Sin (for comparative purposes), the featurette titled “Thoughts on William Inge” (an interview with Shirley Knight), theatrical trailers and a CD soundtrack of movie (composer was Ernest Gold).