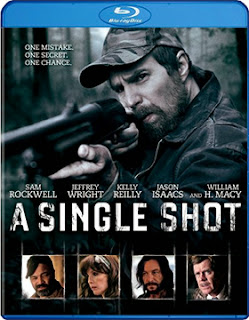 The ARR works out to 116 days and the box office tally from the film’s limited showcase theatrical run (to raise visibility and create critical buzz) was $10,020.

John Moon (Rockwell) is a loser, broke, out of work and very much in danger of losing his wife (Kelly Reilly) and newborn child.   He’s taken to hunting deer out of season — it’s a cold, miserable and dangerous endeavor — but instead of bagging some venison, he ends up tragically killing a young woman hiding out in the woods instead.

An isolated trailer is her hideaway home, which comes with the surprise of a stash of cash … Moon’s decision is easy — didn’t see no dead girl; didn’t see no money! 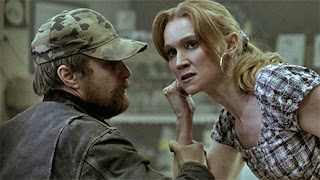 That’s the set up.   Backwoods, a loser, an accident and money … and you can bet that alcohol, sex and violence will also figure into the equation before the final credits roll.

Of course that is all set in motion when her convict “boyfriend,” Waylon (Jason Issacs — The Patriot, Green Zone, etc.) gets wind of Moon’s involvement.   He begins — along with his sex-addicted buddy (Joe Anderson — The Grey, Across the Universe) — to stalk the would-be “hunter” and doesn’t care who gets in his way as long as he gets justice … and the money back!

Well Go U.S.A. has landed an intense thriller to kick-off the New Year.   No word as of yet as to bonus features.