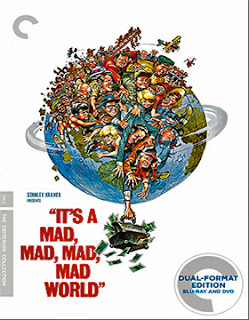 The Criterion Collection, with sales and distribution support provided by Image Entertainment, announced its first wave of Blu-ray/DVD Combo Packs for 2014 this past week.

This masterpiece of an ensemble comedy — you name a comedian from the period, and they are in it — arrives with a new film transfer for both the standard theatrical release (running 159 minutes) and a faithfully reconstructed presentation of the original road-show presentation (clocking in at 197 minutes), which includes scenes not seen since the film’s initial theatrical engagement.

As to bonus nuggets for this must-have comedy, Mark Evanier, Michael Schlesinger, and Paul Scrabo (self-styled aficionados of the film) will provide commentary, plus there is a new documentary on the film’s visual and sound effects (Oscar-winner for Walter Elliot’s work on the film), a vintage talk show (circa 1974) hosted by Kramer and featuring cast members Cid Caesar, Buddy Hackett and Johathan Winters, plus a vintage 1963 two-part “Telescope” episode revolving around the film’s theatrical press junket. 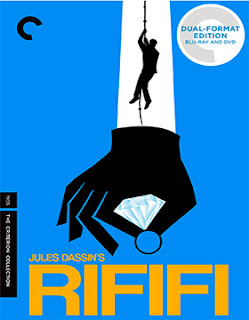 Before Heat (1995) and Miami Vice (1984-1990), Michael Mann showed what he could do with a stylish tale of crime, criminals and deeply flawed anti-heroes.   Thief was that film and Criterion will be serving up a new film transfer, vintage commentary from filmmaker Michael Mann and the film’s star, James Caan, plus newly prepared video interviews with both of them.

As for Rififi being a “French” film noir … consider this, Dassin had come to the United States after the war, directed film noirs such as Brute Force, The Naked City and Thieves’ Highway and was then “blacklisted.”    He simply took his film noir filmmaking skills honed here and took them home.  Rififi, with an American cast, would have fit right in …

Bonus features are limited to an interview with Dassin and set design drawings by Alexandre Trauner (twice nominated for Set Decoration — The Apartment and The Man Who Would Be King; winning for the former in 1960). 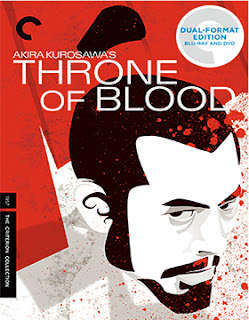 Bonus goodies included with the Throne of Blood are commentary from film historian Michael Jeck, two different subtitle translations and a documentary on the making of Throne of Blood.