Updates for Midnight Releasing's Demon and Night of the Naked Dead on Dec. 3 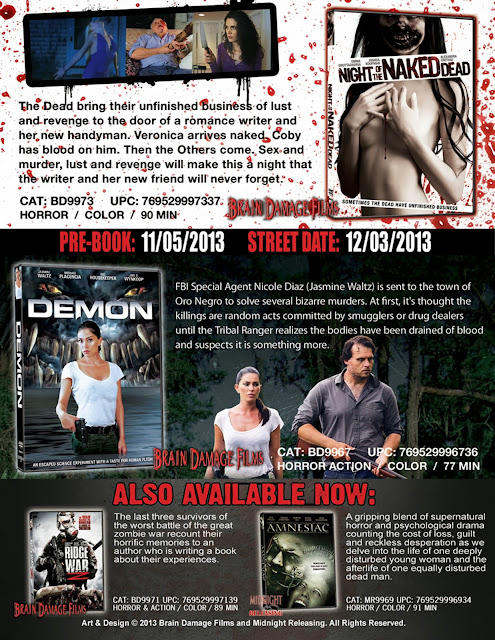 Director Rob Walker’s Demon, a tightly crafted homage to ‘50s creature features, will be heading to DVD as a Brain Damage Films production from Midnight Releasing on Dec. 3.

The oh so sexy Jasmine Waltz (Lost Angeles, Cheerleader Massacre 2) stars as FBI Special Agent Nicole Diaz, who is assigned to the backwater Florida hamlet of Oro Negro — more or less as punishment for some backstory transgressions — to investigate a series of blood-draining murders.

On the surface it seems like a demented serial killer, but what she finds is that there is some strange secret government science project that has run amok … it, a creature designed for combat, lives and hunts for just one thing — human BLOOD!

A raging storm, a mismatched couple — Emma (Emma Gruttadauria) and David (Joshua Koopman) trapped in a remote creepy Cape Code house and the sudden arrival of eerie strangers made for a night filled with terror … and the ultimate fight for survival.