Kino Lorber Tabs Jan. 28 For The DVD Debut Of The Coexist Comedy Tour 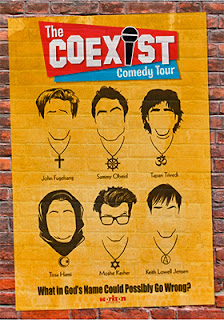 On Jan. 28 Kino Lorber will be asking the question, “When a Jew, a Christian, a Muslim, a Hindu, a Buddhist, and an atheist walk into a bar … what in God’s name could possibly go wrong?”   The answer is laughs, lots of laughs … or as Foghorn J. Leghorn might have said in answer to the question, “It’s a joke, son.”

This stand-up comedy concert/documentary stars Moshe Kasher (Jew), John Fugelsang (Christian), Tissa Hami (Muslim), Tapan Trivedi (Hindu), Sammy Obied (Buddhist) and Keith Lowell Jensen (atheist) ... their on-stage delivery is that of humor — not hate — and the gist of their routine is that they are in search of a funny Christian!!!