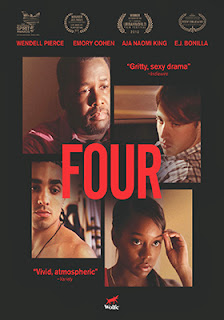 This intense drama — a four-person character study that deals with sex, lies, relationships, duty and racial issues — has been opened up by Sanchez from its stage origins to good results and if anything the power of the inner-locking stories become even more so with the sultry surroundings of the July 4th weekend layered onto the proceedings.

Father and daughter, Joe (Wendell Pierce — Treme, The Wire) and Abigayle (Aja Naomi King), have their secrets.   Joe’s wife is ill and the weight of her care falls to his daughter … it is oppressive and painful.   She wants relief … and he wants out.

He escapes through his work, while she takes flight — on this particular day — into a relationship with a young man named Dexter (E.J. Bonilla), whose school day’s fame has faded into a blur of drugs … it is not a wise choice on her part, but it does offer her something very different from the day-in and day-out drudgeries of being a caregiver.

The fourth member of this little group is June (Emory Cohen), a younger man conflicted in his sexual identity, whom Joe met online and has impulsively set up a meeting with.  An older black man — married as well — hooking up with a white “boy” has all the makings of an encounter that could quickly spiral out of control.

As these two “escapes” develop over the course of this summer’s evening we witness emotions that are laid bare, secrets that are revealed and choices that are made.   The result … Four is absolutely mesmerizing.

Bonus features include commentary from filmmaker Joshua Sanchez and a behind-the-scenes production featurette. 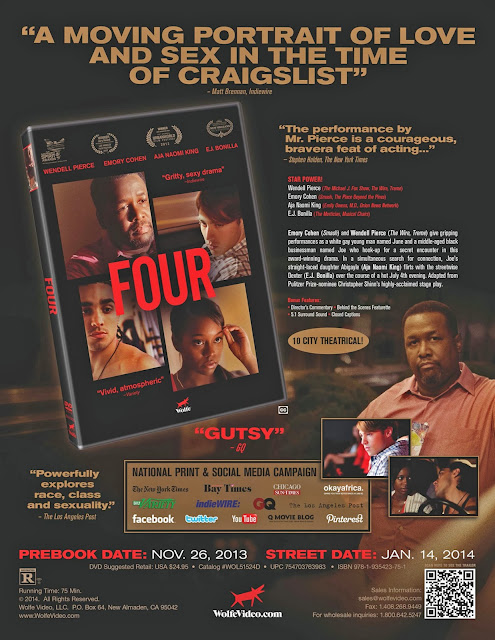