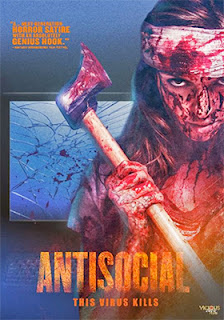 So what causes seemingly ordinary people to turn into homicidal zombie-like maniacs? Eager to snatch-up the nearest sharp object and cut up their closest friends into little bity pieces?

The signs are everywhere that this forthcoming zombie plague is of our own making and the causes are literally right in front of us.  That’s more or less the premise of Calahan’s claustrophobic apocalypse thriller (with a message of course).

A fun New Year’s Eve party brings Samantha (Michelle Mylett), her boyfriend Mark (Cody Ray Thompson) and a trio of their college friends together (for genre fans, this is the victim pool), but before the celebration can get into full swing they learn that some sort of virus or plague has broken out and unthinkable violence is running unchecked throughout the land … they are advised to remain calm and lock themselves in until it can be sorted out. 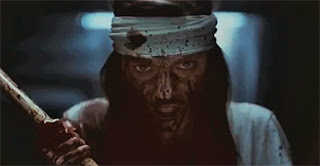 What they don’t realize — until it is too late — is that the social media devices that they are hooked on are triggering the plague-like symptoms.   Let us just hope the power goes out or it is going to be one hell of a New Year’s party!!!

Bonus nuggets include interviews with the cast and crew, plus footage from the film’s debut in Toronto.