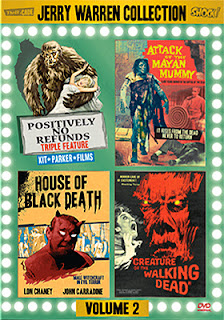 Titled Jerry Warren Collection, Volume Two (the first collection streets on Dec. 10), we kick off the chills with horror veterans Lon Chaney, Jr. and John Carradine teaming in the 1965 warlock and werewolf battle, House of the Black Death (aka: Blood of the Man Beast).

According to legend, director Harold Daniels began the film, but wasn’t able to complete it to the satisfaction of the producers.   Enter Warren, who looked at what he, shot some connecting sequences and voila House of the Black Death was ready for its theatrical rollout.   This would help explain why Chaney and Carradine — much like Bette Davis and Paul Muni in Juarez — star in the same film, but never appear together on screen.

Another film that Warren “pieced together” just so happens to be next up in this collection, Attack of the Mayan Mummy.   This appears to be — and perhaps the details are lost to time — a blend of Mexican filmmaker Rafael Portillo’s 1957 La Momia Azteca and footage cobbled together by Warren (the story unfolds in a series of flashbacks featuring Rosa Arenas as “Ann Taylor”). 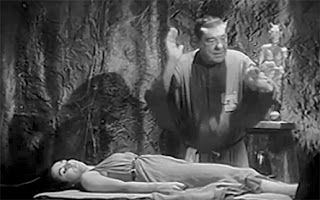 Rounding out this delectable trio of film classics in Creature of the Walking Dead.  Of the trio, this 1965 film (written and directed by Jerry Warren) about a mad scientist — with a terrible and deadly secret — coming back from the dead is almost entirely of his own making (borrowed footage from Fernando Cortés’ La Marca del Muerto is minimal).

No one will ever mistake a film crafted by Jerry Warren for a Scorsese or a Spielberg entry, but you cannot deny that his work is fun and often very entertaining (often for the wrong reasons).