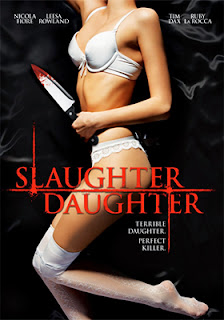 Scream Queen, Nicola Fiore (Ms. Cannibal Holocaust, She Wolf Rising, etc.) stars as Farrah, a repressed beauty — suffering something of an emotional break — who is living under the oppressive thumb of her sexually deviant and sadistic mother (Leesa Rowland).   Hate is not a strong enough word to describe her feelings for dear old mom!

Her salvation comes from an unexpected source.   While hold up in her room, not dealing with anything for weeks on end, Farrah strikes up a pen pal relationship with a notorious death row serial killer named Jackson Miles (Tim Dax), who takes a liking to this “broken angel” and begins tutoring her on the fine art of killing!    This is, as this twisted story unfolds, a winning combination.

This nifty spin on the slasher genre comes with a blooper reel, deleted scenes and webisodes.