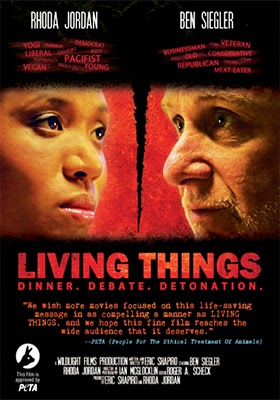 Not since Wallace Shawn set down at the table across from Andre Gregory in director Louis Malle’s 1981 film, My Dinner With Andre, has there been a cinematic meal quite like that of writer/director Eric Shapiro’s latest film, Living Things.

While Wallace Shawn and Andre Gregory covered a wide spectrum of eclectic subjects over a pleasant meal, the dinner that Rhona (Rhoda Jordan — Rule of 3, Galaxy Hunter, etc.) and Leo (Ben Siegler — Big Brother Jake, Fallen, S.W.A.T., etc.) sit down to focuses like a laser on life styles, eating habits and animal cruelty.   It is a verbal battle … a war of ideas!

Rhona and her father-in-law end up alone at dinner one evening, it wasn’t planned that way, but there you have it.   She’s a vegan and a yoga instructor, while Leo is a meat-eating combat veteran — oil and water, Venus and Mars, black and white … you get the picture.

These two polar opposites, who begin with a discussion of her diet, quickly expand the “debate” into the equivalent of verbal fisticuffs as they wade into the treatment of animals, health issues and even the environment will all become fair game before dessert is served!
Cinema Libre has tabbed Apr. 15 as the DVD debut date for this incendiary film, which has been endorsed by PETA.