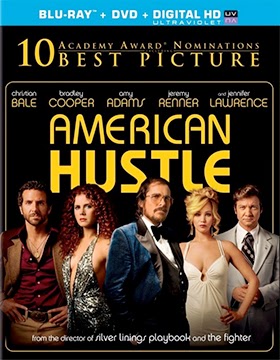 Director David O. Russell’s Best Picture contender, American Hustle, will be released by Sony Pictures Home Entertainment on Mar. 18 as both a stand-alone DVD product offering and as a Blu-ray/DVD Combo Pack (with UltraViolet).

The box office take currently stands at $127 million (and growing) … the ARR for this mid-March street date is a swift-to-market 95 days.

In addition to the Best Picture nomination, filmmaker David O. Russell is one of the five finalists in the Best Director category and he teams with Eric Singer for the Best Writing – Original Screenplay Oscar nomination as well … plus Christian Bale, Amy Adams, Bradley Cooper and Jennifer Lawrence all have acting nominations.

Bonus features are limited to deleted scenes and a making-of featurette.