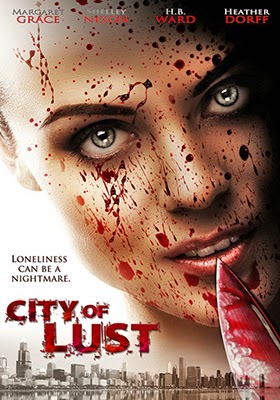 Midnight Releasing has tabbed July 1 as the DVD debut date for the Brain Damage Films release of writer/director David A. Holcombe’s City of Lust, which is an homage to the Giallo horror sub-genre made famous by such Italian auteurs as Dario Argento and Mario Bava during the 1960s and 70s.

Originally title Yellow, which is the literal translation for Giallo … the change in title probably makes it more commercial.  After all, what does “Yellow” mean to the majority of today’s casual genre fans!

In any case, Holcombe manages to deliver both a horror film within the tradition of the  Giallo culture and a nifty mystery … a killer yes, but who?

The obvious choice is Arianna (Margaret Grace), who has arrived in Chicago to work at a beauty salon.   There is something very odd about her (the cause of which is only revealed in the third act … very clever), which quickly gets under the skin of her boss and fellow employees.

Indeed, things go missing at the salon and Arianna is the focus of accusations … but we suspect early on that she is simply being set up by one (or more) of her co-workers.
Her only “buddy” is Renee, who is in reality a T-girl, who likes to cruise the underground clubs with Arianna in tow.   To escape this, which is not really her thing, and also from the day-to-day grind of work she turns to a sex-chat phone service (yes, she is one odd little duck), where she eventually hooks up with one of the “call girls” named Jackie (Jill Oliver) … and that’s when people in her life start ending up dead. 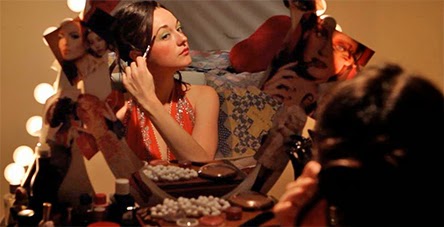 A serial killer is definitely at work, but filmmaker David A. Holcombe keeps us guessing and manages to add a number of viable creeps (red herrings) to the mix keep us off track right up until the reveal.

Bonus goodies here include deleted and extended scenes, a blooper reel, a behind-the-scenes featurette, rehearsal footage and videos used to promote the funding of the final production.