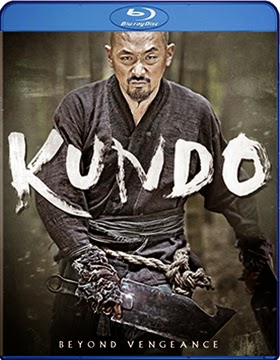 While the Civil War raged between the Union and the Confederacy, half a world away the Joseon Dynasty was in its death throes in Korea … corruption and political intrigues marked the period.   Among the most ruthless of them all is Jo-Yoon (Dong-won Kang), a noble, but without a birthright, who decides to take matters into his own hands to secure the power that he craves.   He’s basically a homicidal maniac who thinks nothing of murdering in cold blood if it either advances his cause … or gives him pleasure.

Against this tyrant stands a sort of “Magnificent Seven” group of outlaws (think: Spaghetti Western) called Kundo, who’s latest recruit, Dol Moo Chi (Ha Jung-woo), was one of  Jo-Yoon’s hired assassins who could not carry out the deed.   He’s joined the “good guys,” but violence also marks their calling.   Basically, it’s all-out war and there will be only one winner!