Well Go USA Has Selected Feb. 10 For The DVD And Blu-ray Debut Of Director Richard Gray's The Lookalike 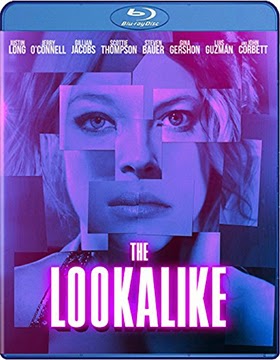 Once you go down this particular rabbit hole there will be no turning back.   Indeed, a miserable death is all but certain if you fail … but then, what does it matter since you are likely to be dead anyway.   Ahhh, go ahead, take the chance.

Here’s the set-up for director Richard Gray’s adrenaline-rush crime thriller, The Lookalike: Spinks (played by John Savage) is a drug kingpin and a stone cold killer who has one little kink in his armor …  a fetish (sexual in nature) for a trollop named Sadie.  It is their relationship with this beauty that has gotten brothers Joe (Jerry O’Connell) and Holt (Justin Long) on the inside of Spinks’ criminal empire, without her, they are just meat … dead meat.

They are poised to make the “big deal” with Spinks that will set them up, but on the very eve of this monster move their ticket, their bimbette ticket, ends up dead (literally, “lights out”).   She’s dead and so are they … unless they can come up with a “Hail Mary,” so to speak.

In the tradition of such films as Lock, Stock and Two Smoking Barrels, Snatch and Sexy Beast, Joe and Holt come up with a plan that is so complicated and unlikely to succeed that you can’t wait for the next thing to go wrong … and things do go wrong!   After all, when you mix in double-dealings (there is more going on here than just “their plan”), sex, police stings, drugs, the Big Easy and plenty of violence you would expect nothing less than a overload of twists, turns and surprises.   That’s The Lookalike in spades!

The plan seems simple enough, find a replacement for the dead Sadie just long enough to fool Spinks and make the deal.   Since the boys run in a “loser” circle, full of druggies and petty criminals, the choices seem pretty slim.   But there is one that has possibilities … and that would be Mila (Scottie Thompson).

There are just a few things that boys need to work on.  First, she’s deaf.   Second, she’s missing a leg (seriously) … and third, she’s dying of some drug-induced disease (or is she?).   It is a piece of cake.

The Lookalike has some terrific action sequences, nice comedy touches and is populated by the likes of Steven Bauer, Luis Guzmán, John Corbett and Gina Gershon … the perfect action package.

The Lookalike will be making its DVD and Blu-ray debut on Feb. 10 courtesy of Well Go U.S.A.

Email ThisBlogThis!Share to TwitterShare to FacebookShare to Pinterest
Labels: DVD and Blu-ray Release Report, Well Go USA Has Selected Feb. 10 For The DVD And Blu-ray Debut Of Director Richard Gray's The Lookalike