Eagle Rock Entertainment's Styx: Live at the Orleans Arena, Las Vegas Heads To Both DVD And Blu-ray On May 26 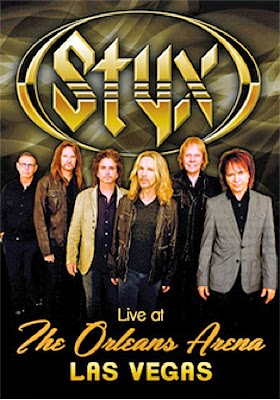 Eagle Rock Entertainment will be rockin’ out with Styx on May 26 with the release of both DVD and Blu-ray editions of Styx: Live at the Orleans Arena, Las Vegas.

The timing of the home entertainment debut of this live concert (July of 2014) coincides with the beginning of the group’s summer-long national concert tour that kicks off in June and runs well into early October.

This 12-song set features Styx’s 1973 breakout song, “Lady,” plus such fan favorites as “Come Sail Away,” “Renegade” and “The Grand Illusion.”

Bonus features include newly-prepared video sessions with founding band members Chuck Panozzo and James “JY” Young, plus other current members of the group that have joined Styx over the years Tommy Shaw (since 1976), Todd Sucherman (1995), Lawrence Gowan (2000) and Ricky Phillips (2003).

Email ThisBlogThis!Share to TwitterShare to FacebookShare to Pinterest
Labels: DVD and Blu-ray Release Report, Eagle Rock Entertainment's Styx: Live at the Orleans Arena, Las Vegas Heads To Both DVD And Blu-ray On May 26