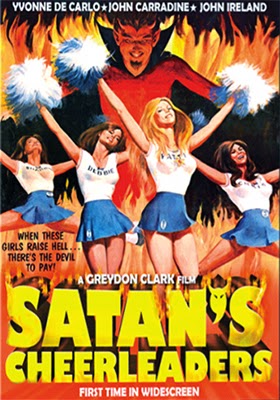 VCI Entertainment has gone to the vaults and reworked director Greydon Clark’s 1977 cult horror/sexploitation gem, Satan’s Cheerleaders and will be releasing a new widescreen film transfer on DVD on Apr. 21.

Billy (Jack Kruschen — Oscar nominated for Best Supporting Actor in The Apartment, plus such films as Lover Come Back, Cape Fear and The Unsinkable Molly Brown) is the none-too-bright peeping tom janitor at Benedict High School.   Being the janitor does have its perks, which includes his love (lust) of the cheerleading squad (played by Kerry Sherman, Alisa Powell, Sherry Marks and Hillary Horan) and long “steamy” showers.   So it is with great glee that he jumps at the chance to “chauffer” them — and their coach (Jacqueline Cole) — to an away game. 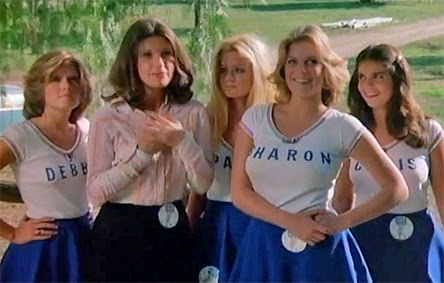 As it turns out, Billy has other plans for his truckload of well-endowed teens, an off-the-beaten path rendezvous with a cult of Satan worshipers headed by none other than screen veterans Yvonne De Carlo and John Ireland.   They need a virgin to sacrifice … but these are cheerleaders!!!