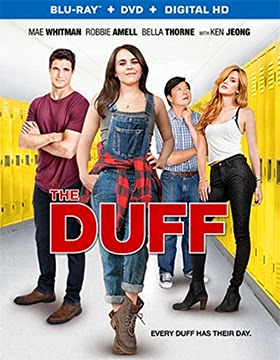 The Duff, starring voice actress and former child star Mae Whitman (the voice of Tinker Bell — among others — and in such films as When a Man Loves a Woman, Independence Day, Nights in Rodanthe, One Fine Day, etc.) in what is clearly a breakout role for her, has an ARR of 109 days and domestic ticket sales currently stand at $33.8 million.

This could be the next Diary of a Wimpy Kid-like franchise (with a Mean Girl twist) … The Duff is a smart, funny look at high school life as lived by a wallflower teen.   Keplinger has more tales on the way and it would not come as a surprise if Whitman is recruited to reprise her role as “Designated Ugly Fat Friend” Bianca Piper in a quick follow-up.

Bonus goodies include a gag reel and four featurettes — “The DUFF Hits The Red Carpet,” “Bringing the Book to Life,” “I Am the DUFF” and “Teen Comedies and The DUFF.”

Email ThisBlogThis!Share to TwitterShare to FacebookShare to Pinterest
Labels: DVD and Blu-ray Release Report, Mae Whitman Stars In The DUFF From Lionsgate Home Entertainment On DVD And Blu-ray/DVD Combo Pack On June 9