Mill Creek Entertainment To Release The Thorn: The Live Theatrical Experience On DVD On Mar. 27 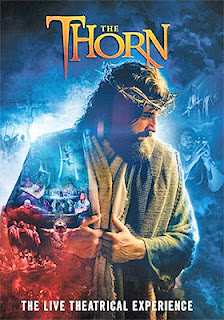 For over 20 years audiences have flocked to see John and Sarah Bolin unique stage production of the Passion Play — the life, death and ultimate resurrection of Jesus.

Mill Creek Entertainment announced this past week that The Thorn: The Live Theatrical Experience will make its DVD debut on Mar. 1 — timed perfectly for 2016’s Mar. 27 Easter celebration.

The Thorn is not your traditional Passion Play, but rather a mix of theatrical disciplines that include aerial acrobatics, ballet, martial arts and more … all performed by a mix of professionals and volunteers.

Over the years over one million people have witness this live production — now, for the first time, it will be available on DVD. Also added to the Mar. 1 release calendar are DVD editions of director Kevin Connor’s 2000 film production of In the Beginning …, starring Martin Landau, Jacqueline Bisset, Bill Campbell and the late Christopher Lee as Rameses I, and My Big Fat Greek Life: The Complete Series, the short-lived sitcom spin-off of the wildly popular My Big Fat Greek Wedding, starring Nia Vardalos (of note, Mill Creek has timed this release perfectly as the long-awaited sequel, My Big Fat Greek Wedding 2, will make its theatrical debut on Mar. 25).

And lastly, added to the Mar. 15 release calendar is the three-disc DVD collection of Dinotopia: The Series.

Email ThisBlogThis!Share to TwitterShare to FacebookShare to Pinterest
Labels: DVD and Blu-ray Release Report, Mill Creek Entertainment To Release The Thorn: The Live Theatrical Experience On DVD On Mar. 27