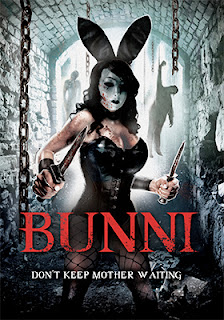 Not since Mrs. Voorhees went on a killing rampage in Friday the 13th has there been such a loving mother so devoted to hacking up teens as there is in writer/director Daniel Benedict’s Bunni.

It’s Halloween, which is a terrific bit of timing for our story on two fronts.  First, the scream queens are not out of place being dolled up in alluring “costumes,” and second, well, it’s Halloween and you already know about all that goes with that particular holiday.

As our story unfolds — after a brief backstory set-up — a group of these party revelers slip away from the festivities to take advantage of a nearby abandoned warehouse — this, of course, is the victim pool.  Soon the likes of Ashley (Sara Ammons) and Nikki (Sabrina Hulsman) are sliced and diced like you would expect from any good ‘80s slasher flick.

There’s a ringer in the mix (pay close attention to the set-up) and we end up having to choose between Bunni (Cat Geary) and the plucky Paige (Mercedez Varble) to root for — slashers like Bunni are every genre fan’s guilty pleasure, so it is a hard choice!!