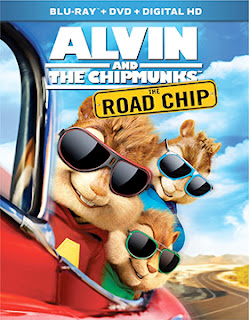 Retailers are taking orders, a key distribution web site is certain of the date and Wikipedia has gone so far as to post the street date for both the DVD and Blu-ray/DVD Combo Pack editions.

With a sizzling fast ARR of 88 days it seems entirely possible that 20th Century-Fox Home Entertainment hasn’t had the time to actually get a formal press announcement written, approved and circulated for the Mar. 15 release date of director Walt Becker’s Alvin and the Chipmunks: The Road Chip.

Critics slammed it and the Razzie Awards nominated it in the Worst Prequel, Remake, Rip-off or Sequel category, but kids loved it to the tune of $82.5 million in ticket sales … and that’s all that counts!!!
Posted by DVD & Blu-ray Release Report at 5:20 PM