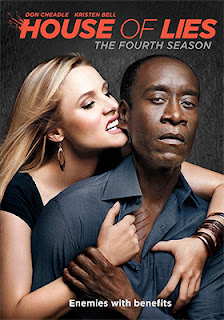 Paramount Home Media has tabbed Apr. 5 for the next go-round with Marty and Jeannie, of course — for fans of the series — that would be Don Cheadle starring as the oleaginous head of Kaan & Associates (a “consulting” firm) and Kristen Bell as his partner in crime (among other things) in House of Lies: The Fourth Season.

All 12 episodes of double-dealing, sexual encounters and questionable business practices are featured here (complete with a season-ending episode that speaks to the old saw of “the enemy of my enemy is my friend”).

The timing of this double-disc DVD collection is on the mark as the debut of season five takes place on Apr. 10.

Also streeting on Apr. 5 is the return of Matt LeBlanc’s comedy series, Episodes: The Fourth Season, which could also be timed for its fifth season rollout (nine new episodes have been promised by Showtime).

This is a double-disc collection featuring all nine episodes of Matt LeBlanc having fun being alternate version of … Matt LeBlanc!