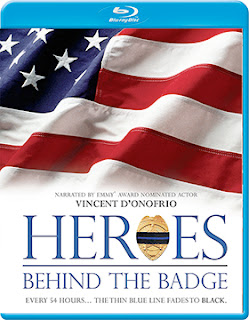 Both of these labor of love documentaries — Erfurth was a former officer with the Miami-Dade Police Department — have been previously available through a fundraising effort at the National Law Enforcement Officers Memorial Fund.

The star of Law & Order: Criminal Intent, Vincent D'Onofrio, serves as the narrator for both films.

Heroes Behind the Badge is a 2012 feature film that focuses on three separate stories involving member of the law enforcement community that were killed in the line of duty.

The first case involves the 2011 murder of San Diego Police Office Jeremy Henwood, who was unaware that a crazed gunman (who had actually left a suicide note before he set to kill people) was on a shooting rampage. 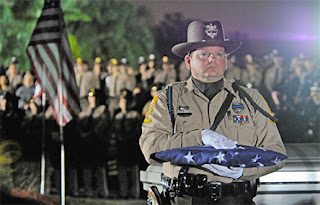 It began with the shooting of a random customer at a nearby In-n-Out Burger, he then sped away on the nearby freeway (at speeds reaching over 100 MPH) and we he returned to the surface streets he came across Henwood, quite by accident parked in a McDonald’s parking lot.

The killer drove up to his car and shot Henwood at point blank range with a shotgun.   What made the murder all the more poignant is that footage from the restaurant later revealed that Henwood had bought a teenage boy some cookies as an act of kindness.   Henwood, himself, never finished his own meal that day. 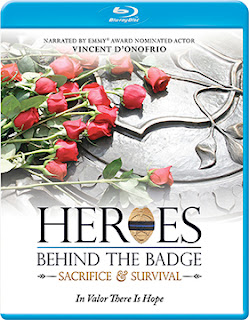 The second story featured in Heroes Behind the Badge is about the double-murder of Miami-Dade Police Officers Roger Castillo and Amanda, who were ambushed and killed by a suspect that they were attempting to serve a murder warrant on … he was a life-long criminal by the name of Johnny Simms.

The third involves Clark County (Springfield), Ohio Deputy Sheriff Suzanne Hopper who responded to a “shot’s fired” call and while investigating the site of disturbance was ambushed and killed.   A fellow officer was also wounded during the subsequence exchange of gunfire with the suspect.   Suzanne Hopper left behind a husband and four children … she was just doing her job.

Heroes Behind the Badge: Sacrifice & Survival is the 2013 follow up feature film, which also highlights the stories of two additional members of the law enforcement community who were killed on duty, plus three profiles of injured police officers, as well as a visits to the 9/11 Memorial site in New York City and the annual National Police Week ceremonies in Washington D.C.