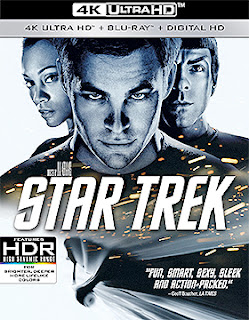 There was a lot of work — and a lot of thought — behind Paramount Home Media Distribution’s first two Ultra High-Def (UHD) Blu-ray Disc releases, Star Trek and Star Trek Into Darkness, both streeting June 14 (with a May 3 preorder date).

Before the studio became the fourth major (fifth if you include Lionsgate) to join the UHD release game (Universal would announce their UHD BD release intent later in April), Paramount spent a lot of time making sure their first releases would be top of the line, according to Ed Hoxsie, SVP of worldwide product production and fulfillment for the studio.

“We were working on these films [for UHD] long before they were announced,” he said. “And we’re doing a lot of work upstream to prepare.  We prep things from the theatrical release window to prepare for home entertainment to do it.”

Knowing how important the upgraded, 4K home viewing experience needed to be with these first releases from the studio, Paramount had dozens of eyeballs on the picture, from master to compression, along with people from the studio working directly with third party quality control vendors to look at how the picture would come through on as many screens and as players as possible.

“All monitors are not the same, and not all players are the same,” Hoxsie said. “They all respond differently.  So what we do is look at the best-case scenario, be sure we catch everything we can catch, then put them on other types of systems, blow up brightness, gamut, whatever, and try to look at it like a consumer who just takes something out of the box and puts it in their living room.”

For these first two Paramount UHD Blu-rays, the studio is also including HDR [high dynamic range] 10, the industry baseline standard for the upgrade contrast between the brightest whites and darkest blacks, a feature being highly touted for 4K sets and content.  Additionally, Paramount is including Dolby Atmos on both releases. Atmos is Dolby’s object-based, next-gen sound technology, that puts sound above, below and all around the viewer. 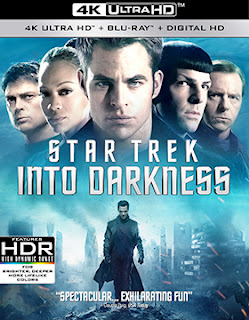 “We’re going out with HDR 10, and we won’t release UHD without HDR.  We feel it’s both the resolution and the high dynamic range that makes the product great.  And we’ve also updated the audio on these first two titles to have Atmos, so it’s a full, immersive audio mix and visual experience,” Hoxsie said.  “We went back to the [2009] Star Trek and actually had the original [sound] mixers go in and do an Atmos mix from the ground up with the original elements.  They’re perfect for Atmos.  Since we’re doing HDR, we needed to bring up the audio with it.”

He added that both UHD Blu-rays were done on 66 GB discs, with just the film and a commentary track found on the UHD discs (both films come with a standard Blu-ray of the film and a bonus disc).  The reasoning was simple: don’t cram too much on and overload what’s meant to be a top-notch visual-audio experience, Hoxsie said.

“Two years from now, if we want to put UHD bonuses on these discs, the 100 GB will come into play,” he added. “Or if one day we do a movie that’s three hours long, the 100 will do that.  We’re fanatics with our bit rates, and I can say that both are sufficient, and hold enough to adapt the Atmos tracks.”