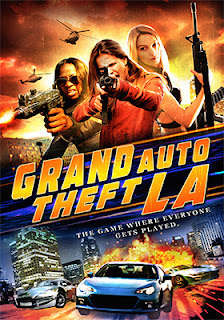 Vixen (Mahogany Zachary, who also co-produced), Katie (Isis Velazquez) and the rest of their girl-gang are what you would call gamers of the first order.   Give’em a joystick, fire up the TV and they can score with the best of them.

But these are not just game-playing sweeties.  Angels from Los Angeles, their game-playing is not just for fun; not for time-killing kicks … but a little practice for the real thing.   Vixen has decided that they are ready to rock and roll for the absolute control of the “Calles de Infierno” section of the city … so give them a gun, a machete or a knife and they are ready to rock and roll with the cartel for control of these very mean streets.

If you want violence and chicks who can more than handle themselves in any street fight, then Grand Auto Theft LA will be right up your action alley come May 24!!!