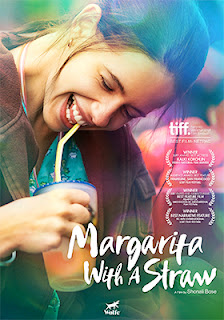 Kalki Koechlin is a name that is not likely to be familiar to American audiences.  She is a star in her native India — in the world of Bollywood cinema — but she almost didn’t land the pivotal role of Leni in director Anurag Kashyap’s 2009 film, Dev.D (an adaptation of the Chatterjee novel “Devdas”), because she “wasn’t Indian.”

Such is the conundrum of Kalki Koechlin, an international beauty, born to French parents in India.  Raised in India, fluent in Tamil (plus English, French and Hindi), educated, talented and a gifted actress ... a Bollywood star.   Three-times nominated for IIFA Awards in the Best Supporting Actress category — the equivalent of our Oscars.

On June 14, Wolfe will give domestic audiences a chance to see her shine in director Shonali Bose’s international film sensation, Margarita With a Straw.  That’s the street date for the award-winning DVD debut of a film that will make you a fan of Kalki Koechlin, not because she is a Bollywood beauty, but because she is a gifted actress.

In Margarita With a Straw she plays Laila, a college student attending Delhi University, who is afflicted with cerebral palsy.   Wheelchair-bound, she is nevertheless a talented writer with a flair for alternative music compositions, who has her heart broken when she is rejected by a fellow student that she has fallen in love with.

You see that it is hopeless — take one look at her — you feel for her, her body contorted, but her brain alive; her beauty shines through.   So when an opportunity to spend a semester abroad presents itself (at NYU) she jumps at it.   Her mother, Shubhangini (Revathy — Thevar Magan, Kizhakku Vasal), goes with her to Manhattan to help her navigate this foreign culture; this alien world.

This is your set up.   Filmmaker Shonali Bose brings our poor, physically-challenged young woman to a foreign land … where she might rightly find herself alone and isolated.   Instead, she meets another student, a blind woman named Khanum (Sayani Gupta) from Bangladesh — in India their paths would never cross.

At first her mother is upset, not that Khanum is from Bangladesh (that is problem enough, but we are in Manhattan, so you deal with it), or that she is blind (one blind, one in a wheelchair … how does that work), but that she is a woman.  Despite her misgivings, she has never seen her daughter so happy. 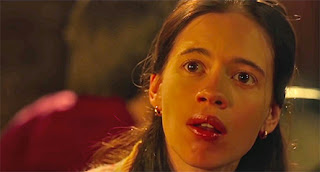 For Margarita With a Straw to work — and it is a beautiful film — you must accept Koechlin’s performance.   She can’t be just an actor acting, rather she must be the character of Laila.  You have to believe or the film simply doesn’t work.  Of note, in interviews it has been revealed that Shonali Bose’s sister suffers from cerebral palsy, so her understanding of the affliction and what she expected from Koechlin has been translated to the screen flawlessly.

Like we said, when Wolfe brings Margarita With a Straw to the DVD market place on June 14 you will become a fan of Kalki Koechlin.  She is an amazing talent.

The film is presented in Hindi and English (a mix), with English subtitles throughout (Laila’s slurred dialogue is often hard to understand).  As a bonus, there is a behind the scenes featurette. 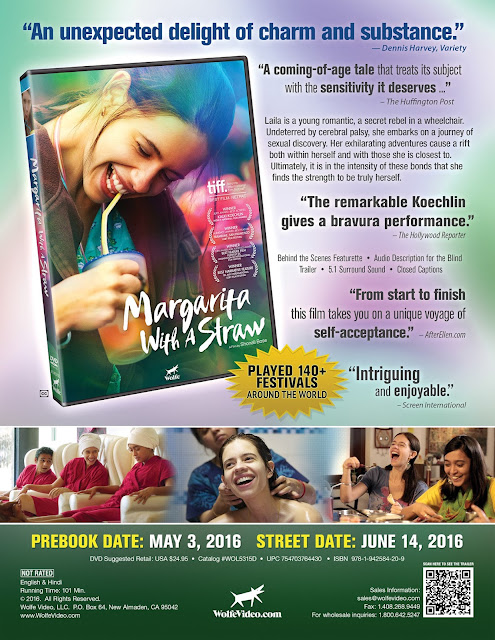 Email ThisBlogThis!Share to TwitterShare to FacebookShare to Pinterest
Labels: DVD and Blu-ray Release Report, Wolfe Selects June 14 As The DVD Debut Date For Director Shonali Bose’s Margarita With A Straw