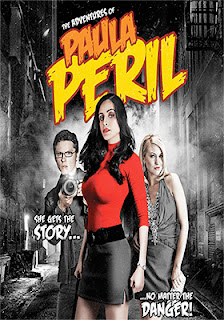 Shami Media Group, with domestic sales and distribution expertise provided by MVD Entertainment Group, has selected Aug. 16 for the DVD debut of director Jason Winn’s The Adventures of Paula Peril, the first feature-length entry into the Paula Peril adventure series.

Filmmaker Jason Winn (The Fat Boy Chronicles, Spiral Bound, etc.) as mentioned, handled the directorial chores for Paula Peril: Midnight Whistle, and based on the buzz from that short film and the cult status of the others, was recruited to take his Paula Peril entry and combine it into a coherent narrative with footage from Paula Peril: Mystery of the Crystal Falcon and Paula Peril: The Invisible Evil.

An additional 30 minutes of new action and connecting sequences were shot in and around Atlanta, Georgia by Winn and his crew to yield this first full-length feature film showcasing the exploits of Paula Peril.

During the golden age of theatrical serials, it was a common practice after the serial had complete its 12 to 15 week (chapters) run, to edit the roughly four hours of action down into a 70 or 80 feature version.   The same holds true here as this modern day Brenda Starr goes where ever the story leads, no matter the danger — and she’s no wallflower, she can more than handle her own in any situation.

Decked out in her signature red top and short black skirt, Paula is hot on the trail of mobster Vince Vincelli (Sam Gentry), but she’s attacked by a group of thugs, beaten into submission and tied to a chair in a dingy warehouse ... things don’t look good for poor Paula Peril!   Vince wants to know what she’s got on him and she’s not leaving that warehouse until she spills the beans.

Meanwhile, her crack assistant, Jimmy (Stephen Hanthorn) tries his best to piece together the clues that might lead to Paula’s rescue.   Her co-worker and bitter rival, Veronica Vilancourt (Marla Malcolm), offers to help, but has her own agenda.   All of this takes place while the newspaper’s editor, Slim Jackson (James Connor) is running up against a deadline … find Paula, save Paula and get that story!!!