The Lucy Show: The Complete Series On DVD From Paramount Home Media On Nov. 15 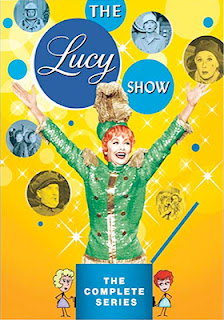 Paramount Home Media and CBS Home Entertainment are teaming up on Nov. 15 for the 24-disc DVD collection of The Lucy Show: The Complete Series.

All 156 laugh-filled episodes (remastered for this release), reuniting Lucille Ball with her I Love Lucy co-star, Vivian Vance, are included is this collectible set.

The series ran from 1962 for six seasons, ending in 1968, and was loaded with guest stars from the period, including Bob Hope (they co-starred in four films together), Dean Martin, Joan Crawford (of which much gossip was generated at the time) and fellow comedian Carol Burnett.   Even “Uncle Miltie” (Milton Berle) and such musical talent as Mel Tormé, Wayne Newton and Frankie Avalon found their way to The Lucy Show set.

The collection comes loaded with bonus goodies, including vintage interviews, commercials from the period and both featurettes and a documentary titled Lucy In London Revisited.

Email ThisBlogThis!Share to TwitterShare to FacebookShare to Pinterest
Labels: DVD and Blu-ray Release Report, The Lucy Show: The Complete Series On DVD From Paramount Home Media On Nov. 15