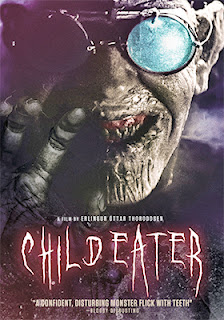 MVD Entertainment Group has selected Mar. 28 as the DVD debut date for writer/director Erlingur Thoroddsen’s horror chiller, Child Eater (which is based on his own 2012 short film of the same name).

A gruesome opening hook sets the tone as we quickly skip ahead to the present day.  This set-up is extremely effective on at least two levels … first, like fingernails on a blackboard, the opening sequence puts the viewer on edge.  Second, you are forewarned as to what will be coming!

With Child Eater, a new, iconic horror creature could be born.   Like those before him, such as Freddy Krueger or the Candyman, Robert Bowery (played by Jason Martin) is blessed with a trait — a killing trait — that is so creepy that just mentioning it (he consumes children’s eyes) is off-putting; sick.   He’s all about terror; he defines it!

So now, as mentioned, in the present day we are introduced to Lucas (Colin Critchley), a young boy whose mother has recently passed away and who is being cared for by a young woman named Helen (Cait Bliss) — think: Laurie (Jamie Lee Curtis) from Halloween.   She is the daughter of the local sheriff, so she’s well aware of all of those old tales about Robert Bowery — long since dead, so no worries.   The dead can’t hurt you!

Lucas goes missing, he kept telling her that there was a boogeyman in his closet … and sure enough, there was (and we have a pretty good idea who that is). So Helen does what any good babysitter would do, she takes off after him — into the spooky woods, of course — and as with all creepy pursuits, in the dark, the mind is prone to playing tricks.   And plenty of “tricks” there will be as the terror mounts and the time grows short … Child Eater is a must for genre fans!