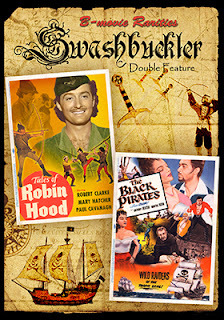 There, forgotten in a dusty corner of a warehouse in New Jersey, was the original 35mm color negative of director Alan H. Miner’s 1954 film release of The Black Pirates.   Film distributor, producer and preservationist Kit Parker had the rights to the film, but the material he had in possession was sketchy at best — certainly not usable for home entertainment distribution.

After years of tracking down this scrap of information or one dead end lead after another, he had finally found what he had been looking for.   As it turned out, the 35mm negative had been sent down to Mexico to strike prints for theatrical exhibition in Central America and had then been returned to New Jersey, where it was stored and forgotten.

The Sprocket Vault announced this past week that on Mar. 7, The Black Pirates — starring Anthony Dexter, Martha Roth, Robert Clarke and Lon Chaney Jr. — will be making its debut as part of the double-feature DVD release titled Swashbuckler Double Feature. 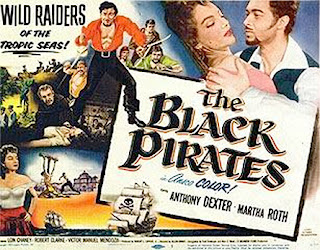 Teamed with it is director James Tinling’s 1951 film adventure, Tales of Robin Hood, also starring Robert Clarke as Robin Hood, with Mary Hatcher as the Maid Marian and Tiny Stowe as the corrupt Sheriff of Nottingham.

Both of these films wereth Century-Fox.   Counted among the films that he had a hand in during the period are the likes of Samuel Fuller’s The Steel Helmet, director Samuel Newfield’s 1951 adventure, Lost Continent, Little Big Horn and Rocketship X-M.
produced by Robert L. Lippert of Lippert Pictures — he produced over 100 films between 1948 and 1955, before cutting an exclusive production deal with 20

Of note, The Black Pirates was shot on location in San Salvador during the middle of political unrest in neighboring Guatemala and due to budgetary considerations, the pirates are never seen aboard ship … they land via rowboat during the opening sequence and spend the entire film looking on land for the lost treasure.