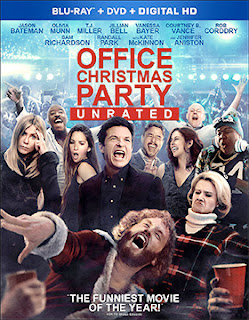 Paramount Home Media says that you are all invited to a party on Apr. 4!

Available on that date will be DVD and Blu-ray/DVD Combo Pack editions … the ARR comes in at 116 days and Christmas-season ticket sales were a snappy $54.7 million.

Trouble is brewing at Zenotek!   The CEO, Carol Vanstone (Aniston), is hell on wheels — there will be no Christmas party, even if they are calling it “a non-denominational holiday mixer,” PERIOD!   And, if that wasn’t a major downer for the holidays, layoffs are planned as well — even her brother, Clay (T.J. Miller — as Erlich in the Silicon Valley television series, plus such films as Deadpool, Transformers: Age of Extinction) is in the crosshairs!

There’s just one chance to save those jobs, land a major account headed by Chicago business tycoon Walter Davis (Courtney B. Vance).   As for the Christmas party, no problem, Carol is heading out town so she will have no way of knowing if “that tree fell in the forest” or not.   Beside, the party would be a great way to introduce Davis to the employees … they could bond.

And just like the tagline from that 1973 sci-fi classic, Westworld, at this party “nothing can possibly go wrong … go wrong … go …”

As to bonus goodies, which are exclusive to the Blu-ray SKU, viewers will have two viewing options — the original theatrical cut and an unrated presentation (extra naughtiness) — commentary by filmmakers Josh Gordon and Will Speck (they previously teamed with Bateman and Aniston for The Switch), outtakes, deleted and extended scenes and the
featuretted titled “Throwing an Office Christmas Party.”