Brain Damage (May 9) And The Night Evelyn Came Out Of The Grave (Apr. 18) On Blu-ray From Arrow Video 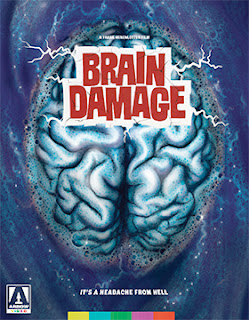 A new digital transfer from original film elements will be delivered to fans as a Blu-ray/DVD Combo Pack on that date.

This indie horror film didn’t quite get the theatrical exposure necessary at the time of its initial theatrical run in the spring of 1988 to make it an instant genre-fan classic.   That would come later with VHS and earlier DVD editions … it is the find of film that really, really grows on you.

Also on the way from Arrow Video on Apr. 18 is a new 2K restoration of the giallo classic, director Emilio P. Miraglia’s 1971 film release of The Night Evelyn Came Out of the Grave.
It will be available as Blu-ray presentation and can be viewed in either its original Italian language version or the dubbed English-language theatrical version. 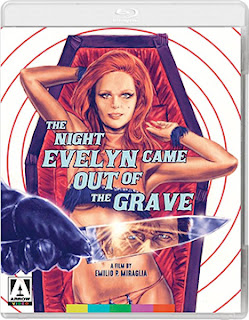 Lord Alan Cunningham (Anthony Steffen) is one nasty, demented individual.   He likes to “invite” young women — especially those with red hair — over to his castle for torture and killing sessions as something of a cure for the affairs of his dead wife, Evelyn.

But now someone is trying to turn the tables and drive him insane.   He’s a murderer to be sure, but someone close to him is more than willing to go him one better.   The third act exposes it all … and someone (not saying who) ultimately gets away with murder!

Bonus goodies include commentary from giallo expert Troy Howarth (author of “So Deadly, So Perverse: 50 Years of Italian Giallo Films”), an introduction to the film by actress Erika Blanc (the double-dealing Susan), a newly prepared video session with film critic Stephen Thrower and three featurettes — “The Night Erika Came Out of the Grave,” “The Whip and the Body” and “Still Rising from the Grave.”

Email ThisBlogThis!Share to TwitterShare to FacebookShare to Pinterest
Labels: Brain Damage (May 9) And The Night Evelyn Came Out Of The Grave (Apr. 18) On Blu-ray From Arrow Video, DVD and Blu-ray Release Report