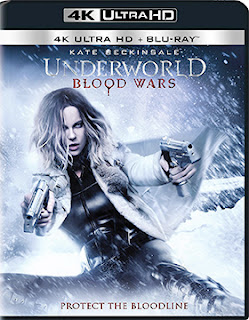 The ARR is 109 days and multiplex ticket sales chimed in at $30.3 million.

The vampires are on the ropes (Bill Nighy’s Viktor is gone) and the werewolves on the prowl for Selene, the “Death Dealer” (Kate Beckinsale), as she holds the secret to the whereabouts of Eve (her daughter), whose blood holds the secret to an eternal reign of werewolf hybrids.

Although Marius (Tobias Menzies), the leader of the werewolves, is dispatched in the film’s finale (a nifty bit of “back surgery” by Selene), there are plenty of loose ends for a sixth entry in this series … stay tuned! Planned for release are DVD and Blu-ray editions, plus a 4K Ultra HD/Blu-ray Combo Pack.   Bonus features include four featurettes — “The Evolution of Selene,” “Building a Blood War,” “Old & New Blood” and “The Evil Evolved.”

Also added to the release calendar this week from Sony Pictures Home Entertainment is the 25th Anniversary Edition of director Penny Marshall’s A League Of Their Own.

It will be available as a Blu-ray edition Apr. 18 … the newly prepared bonus nugget is a featurette titled “Bentonville, Baseball & The Enduring Legacy of A League of Their Own.”   Vintage bonus features include 15 deleted scenes, commentary, a nine-part production diary and Madonna’s music video titled, ” This Used to be My Playground.”