The Film Detective Restores The Vampire Bat For Blu-ray Release On Apr. 25 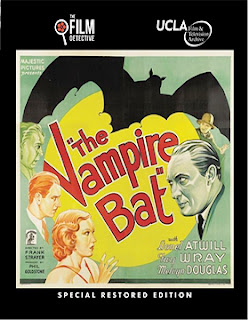 The Film Detective will be bringing a Blu-ray edition of a newly restored version of director Frank Strayer’s 1933 horror classic, The Vampire Bat, to market on Apr. 25.

Tod Browning’s Dracula, with Bela Lugosi, was such a hit in 1931, that it was only natural that the theme would be continued.   Add to that the success that Fay Wray and Lionel Atwill had with the summer of 1932 release of Doctor X and it was only movie gold that this winning combination would find their way to screen yet again (and again with Mystery of the Wax Museum … and all of this before Fay Wray became a legend with the film release of King Kong; both of these were also released in 1933).

Bonus nuggets assembled by The Film Detective include commentary from film historian (and film maker in his own right) Sam Sherman and a newly prepared with session with co-star Melvyn Douglas’ son, Gregory Hesselberg.
Posted by DVD & Blu-ray Release Report at 4:17 PM

Email ThisBlogThis!Share to TwitterShare to FacebookShare to Pinterest
Labels: DVD and Blu-ray Release Report, The Film Detective Restores The Vampire Bat For Blu-ray Release On Apr. 25