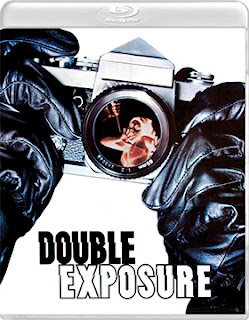 Vinegar Syndrome announced its April DVD and Blu-ray/DVD Combo Pack restorations this past week.   Apr. 25 will be the street date.

Leading the charge is a new 2K restoration (from original 35mm camera negative) of writer/director William Byron Hillman’s 1983 slasher film, Double Exposure, starring Michael Callan as Adrian Wilde, a photographer of models (aka: centerfolds  ... there is plenty of flesh) who has bad dreams.   It arrives as a Blu-ray/DVD Combo Pack.

As genre fans know full well, nightmares in a slasher films is not a particularly good characteristic for a leading man, especially when hookers (“models”), including an uncover cop posing as one, are dropping like flies on the streets of Los Angeles.

So is Adrian the killer?  Or, perhaps, it is his stuntman brother, B. J. Wilde (the late James Stacy — Posse, A Swingin' Summer), who has issues of his own?  Or is it just another Los Angeles slasher on the prowl!

When Adrian sets his sights on Mindy (Joanna Pettet — Casino Royale, The Evil, Welcome to Arrow Beach) all bets are off.   If he is the killer, then she is a goner, but if he is not, how can a man with horrific nightmares, who is just hanging by a thread, ever hope to protect her!   It looks bad for Mindy either way. 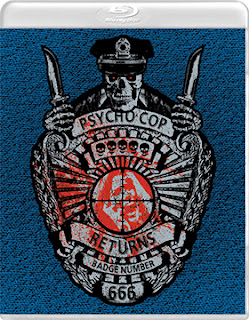 Also getting a new 2K scan from 35mm vault elements is director Adam Rifkin’s
1993 direct-to-video release of Psycho Cop Returns … It too will be available as a Blu-ray/DVD Combo Pack.

When police officer Joe Vickers (Robert R. Shafer), who is in reality a homicidal maniac — which we know from his last rampage (Psycho Cop, 1989) — gets wind of an after hours office party he knows just what to do.

Genre fans will recognize the motif of an “office party” as the mechanism necessary to assemble a “victim pool.”   We have strippers, building security, the guys throwing the party, office workers who stuck around for the fun and a lovely workaholic named Sharon (Barbara Niven) who have to run, hide or outwit Vickers … or die.   Most die!!!

Vinegar Syndrome has restored Psycho Cop Returns (aka: Psycho Cop 2) to it full un-cut glory, or should we say BLOODY glory, plus there is commentary from director Adam Rifkin. 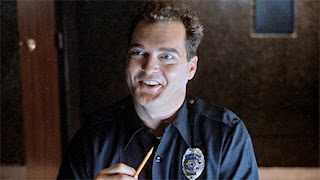 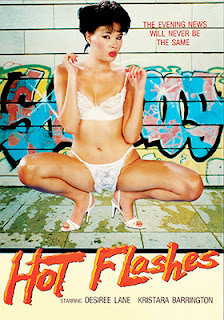 Hot Flashes was shot on film (35mm) as opposed to video, which makes it one of the last of its kind to do so (see Paul Thomas Anderson’s 1997 film release of Boogie Nights to more fully understand the significance of an adult feature actually shot on film during this period).

Rounding out the Apr. 25 restorations from Vinegar Syndrome is the latest in the company’s popular “Peekarama” double-feature series.

This edition on DVD includes Ladies Night (1980, with Annette Haven and Lisa De Leeuw) and Her Wicked Ways (1983, starring Jesie St. James).   Both films are 2K restorations from the 35mm negatives … bonus goodies include a video session with filmmakers Harry and Louis Lewis.