Arrow Video, with domestic distribution and sales guidance provided by MVD Entertainment Group, has selected Dec. 5 as the street date for both DVD and Blu-ray editions of the new 2K restoration of writer/director Robert Allen Schnitzer’s 1976 horror flick, The Premonition.

What’s clever about Schnitzer’s under-appreciated film is the subtle shift(s) in character focus as the story develops.   Brian De Palma’s 1980 film, Dressed to Kill, is probably the best example of a character-focus shift from this period … we start off with Angie Dickinson as center of the film and then we shift to Nancy Allen’s character.

The same holds true here as we begin with Andrea (Ellen Barber — Blood Bride, Natural Enemies, etc.), fresh from a stint in the local nut house, who hooks up with a clown named Jude (an over the top performance by Richard Lynch) at the local carnival.   So right off we have a crazy woman and a clown … you just know that this is going to get creepy. 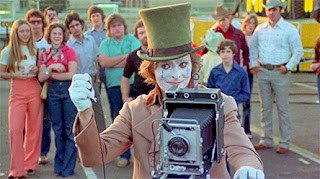 It seems that while Andrea was getting “cured,” her daughter, Janie (Danielle Brisebois — as Stephanie on All in the Family and Archie Bunker’s Place spin-off), was being adopted by Dr. Miles Bennett (Edward Bell) and his wife Sheri (Sharon Farrell — Marlowe, The Reivers, Night of the Comet, It’s Alive, etc.) and Janie has recently been at the traveling carnival where the clown — that would be Jude — spotted her.

OK, so you can see how this is going to play out.   Crazy Andrea will stalk the little tyke and her family and horrible things will happen.   And sure enough she breaks into the home and all hell breaks loose, but she is able to escape and make it back to Jude’s place where he promptly kills her.   Wow, so much for that storyline. 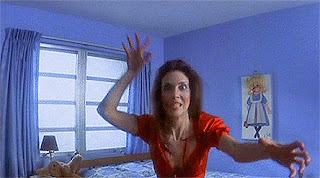 Filmmaker Robert Allen Schnitzer misdirects us and The Premonition transforms magically from a story about a crazy stalker to a tale about a murderous clown and a good old haunting — Andrea’s spirit begins to terrorize Sheri.   It is absolutely marvelous!!

As to bonus nuggets for this ‘70s horror gem, we have commentary from filmmaker Robert Allen Schnitzer, a newly prepared documentary titled Pictures from a Premonition, archived interview sessions both Schnitzer and Lynch and three short films from Schnitzer —Vernal Equinox (1968), Terminal Point (1969) and A Rumbling in the Land (also 1969). 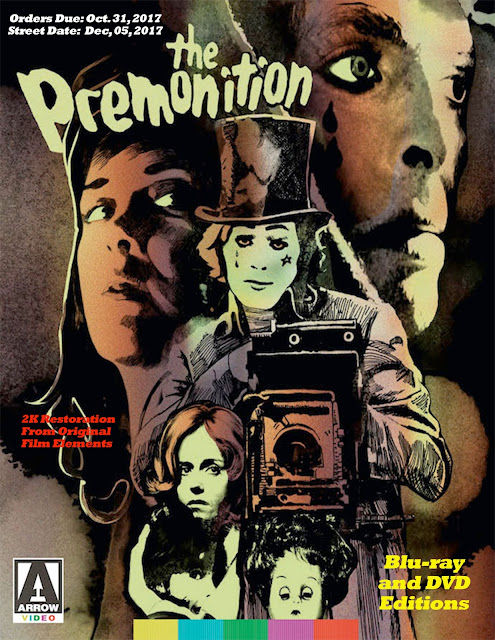