The American Genre Film Archive's 4K Restoration Of The Violent Years On Blu-ray On Nov. 21 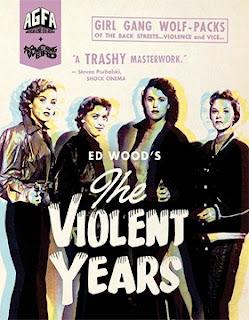 The American Genre Film Archive (AGFA), with sales and distribution expertise provided by MVD Entertainment Group, announced their latest 4K restoration (from the original 35mm camera negative) this past week.   It will be director William Morgan’s 1956 exploitation film (with script by Ed Wood), The Violent Years, which will be available on Blu-ray on Nov. 21.

Everything is twisted is this classic teen exploitation flick … role reversals!   We get a hint of something sinister during the film’s brief prologue that finds the Parkins — husband and wife, Carl (Art Millan) and Jane (Barbara Weeks) — getting some bad news from Judge Clara (played by I. Stanford Jolley).   We then flashback to the events that led up to to this courtroom hearing. 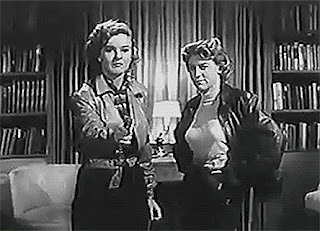 Now you can say what you will about Ed Wood as a filmmaker, but he has twisted things nicely here … taking Paul, Phil, George and Gerald and flipping the sexes to get these four sweet things as tough chicks who rob, rape and murder their way into the headlines of the local paper, which just happens to be run by Paula’s dad.

By film’s end all will be dead as a result of their crime wave and the reason her parents are in court will finally, and ironically, be revealed.

Bonus goodies for this exploitation classic include commentary from Basket Case and Frankenhooker filmmaker Frank Henenlotter, who is joined by Ed Wood biographer Rudolph Grey (“Ed Wood: Nightmare of Ecstasy - The Life and Art of Edward D. Wood, Jr.”) and as AGFA is including a new 2K scan (with the original 35mm theatrical print) of director Brooke L. Peters’ 1961 crime/thriller, Anatomy of a Psycho, as a bonus. 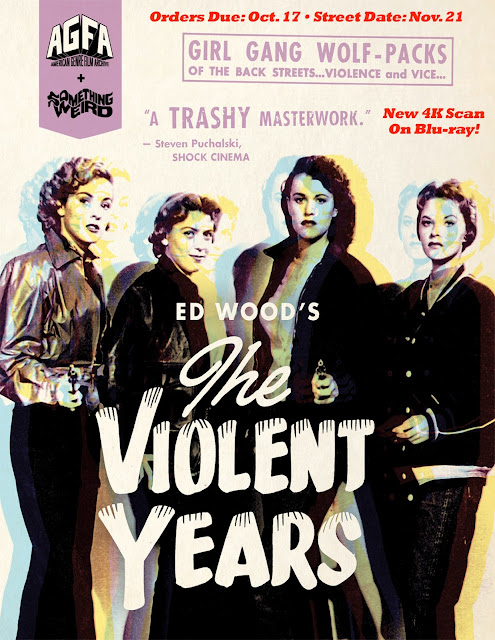 Email ThisBlogThis!Share to TwitterShare to FacebookShare to Pinterest
Labels: DVD and Blu-ray Release Report, The American Genre Film Archive's 4K Restoration Of The Violent Years On Blu-ray On Nov. 21