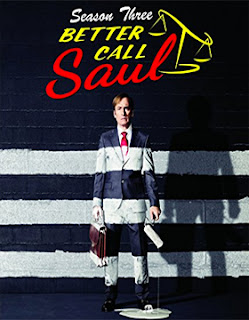 There are some things that are certain in a world of uncertainty.   First, amazon.com is an equal opportunity abuser of breaking announcement embargoes before the supplier in question has a chance to make a formal announcement.

Week in and week out it is the same pattern.   This week the early news comes in the form of order-taking for a Jan. 16 Blu-ray and DVD launch of Better Call Saul: Season Three.

Details?   You want details?   How about three-discs each for the Blu-ray and DVD SKUs, which feature all ten episodes from the third season of the series … bonus goodies, other details, etc. forget it.

The other thing in this world that is certain is that Bob Odenkirk as Jimmy McGill, who we will come to know as Saul Goodman from the Breaking Bad hit series, can get into all sorts of jams and he will not die.   Another familiar face from Breaking Bad is “hit man” Mike Ehrmantraut (Jonathan Banks), which makes both him and Saul “untouchable” … every other character, as we’ve come to expect, could end up in a shallow grave at any moment!!
Posted by DVD & Blu-ray Release Report at 9:33 PM