Mill Creek Entertainments Readies The Kids in the Hall: The Complete Collection For DVD On Feb. 6 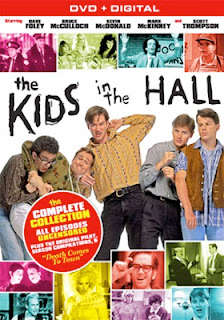 The street date will be Feb. 6.

Included in the collection from Mill Creek Entertainment are all five seasons — that’s 102 UNCENSORED episodes — plus the 2010 eight-episode mini-series titled The Kids in the Hall: Death Comes to Town!

Also on the release calendar is a newly prepared film restoration (from the original 35mm source elements) of writer/director Joe Camp’s 1974 family-favorite, Benji.

It will also be ready on Feb. 6 as a Blu-ray/DVD Combo Pack release … and Benji will be presented for the first time on Blu-ray in the proper theatrical aspect ratio of 1.85:1!!!
Joe Camp and his son Brandon (who is re-launching the franchise theatrically in 2018) will be providing commentary.

Email ThisBlogThis!Share to TwitterShare to FacebookShare to Pinterest
Labels: DVD and Blu-ray Release Report, Mill Creek Entertainments Readies The Kids in the Hall: The Complete Collection For DVD On Feb. 6