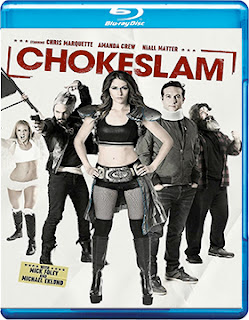 MVD Entertainment Group will be mining comedy gold north of the border on Feb. 27 with the debut of both DVD and Blu-ray editions of writer/director Robert Cuffley’s Chokeslam.

Poor Corey Swanson (Chris Marquette — Just Friends, Freddy vs. Jason, etc.), the love of his life dumped him in high school and it has been all down hill in Regina, Saskatchewan.   She didn’t just dump, she said no to a snap proposal of marriage during a student assembly … so the humiliation had a big old exclamation point to it!

It’s now ten years later and Sheena (Amanda Crew — The Haunting, Final Destination 3, The Age of Adaline, etc.), the wonderful, magnificent love of his life, is coming back to town for their high school 10-year reunion.   She became a famous pro wrestler — Smasheena — while Corey whiled away the time pining over her while making a career of working at the local deli (oh yes, and he still lives with his mother).

Like Christopher Guest’s Waiting for Guffman, it could begin and end right there.   Corey waiting for the arrival of Sheena and all the anticipation and angst that goes with that.   But what’s the fun it that!   Instead we learn that Sheena just wasn’t ready to settle down with Corey, or anyone else for that matter, way back in high school.

She had “anger issues,” which she managed to channel into a pro-wrestling career.    And she’s not just coming home for just the high school reunion, but a “reunion” match has been arranged, that may, or may not, mark her retirement from the ring — her way-too-slick, way-too-handsome “boyfriend,” Tab Hennessy (Niall Matte), has other plans for her … and she’s not happy with that!

That’s your set-up.   Beautiful, sexy, kick-ass woman and local loser … will they find happiness in Regina?

Chokeslam is great fun about a mixed-match pair combined with some terrific ring action — WWE pros Mick Foley and Chelsea Green are on hand to add to the “feel” of Sheena’s backstory. 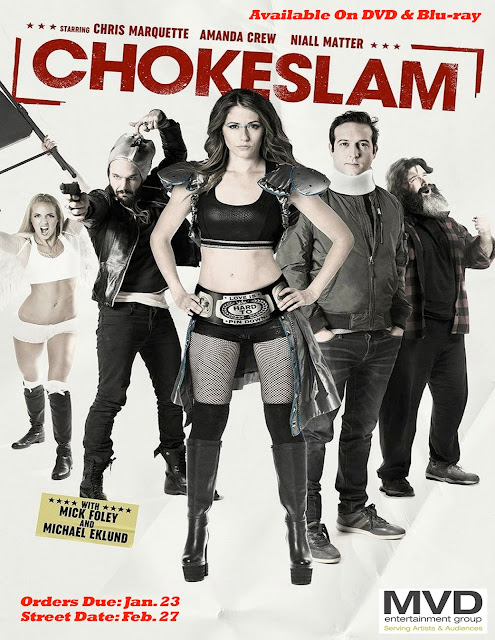